I am using synthing now a while and i encounter a issue that´s making the sync a little too traffic intensive.

I have two pcs:

2 is my backup pc having a lot of identical files(like on PC1) on it.

I want syncthing to do following:

pc 2 should have the same data and folders like pc 1. that means it should delete files that are not on pc1 anymore and just download files missing. the Data from PC 1 is a Master folder and should not delete anything.

with the Master folder option on PC1 enabled, PC2 says its syncronized but has a lot of double files in different folders. PC1 is says that it is not syncronized and offers me a red button with overwrite.

i dont want to delete all data on PC2, just to get conflict free / space saving sync. We talking here for over 2tb of data, so cleaning the folders on pc2 manually is not a proper solution

How can i resolve that?

Did you hit that red button? If not than you probably should so PC2 changes get discarded and PC1 takes over. Red button essentially means that PC2 has newer files and they want to go to PC1. Hit override and PC2 should get synced. That at least worked for me.

Seem to work. Thx for your help and the Fast reply.

No worries mate. I’m glad I could help.

After the folders have been rescanned, i have the same issue again. The button doesnt seem to have a effect.

I already give the user of pc2 admin rights in case deleting is forbidden. it is windows home server 2k11.

If PC1 is not aware of files that PC2 has, it will not delete them as it knows nothing about them, simple as that.

I am not sure how you ended up in this duplicate situation in the first place, but if you have enough space, you could add a second folder on both sides under a different name pointing at the same path on PC1 and a different path on PC2. This would make PC2 resync stuff from PC1 to the new folder, though in reality it would copy most of the blocks across from the old folder to the new folder barely hitting PC1.

We talkin about over 1,5Tb of data for one folder. 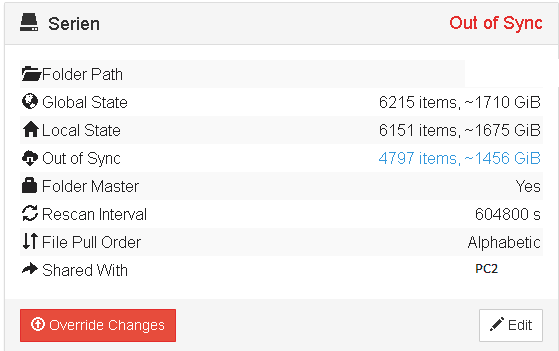 @ Bedosk , thats the first thing a had in mind. Just make a complete backup in lan. Unfortunately one pc is in PT and one in Germany.

I Made a complete Backup 3 Month ago, so i dont understand why syncthing wants to copy over 80% of the files. it is more the other way, that 80% of the files should already be there…

On the PC2 it looks more real for my perception: 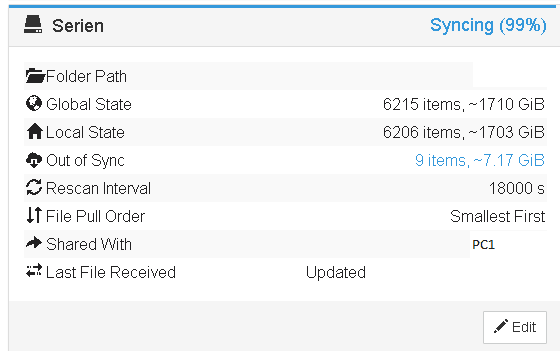 Keep hitting;) if not, you will get them synced on the non-master PC as conflicts… I think the scenario is as follows: FileA, copy from PC1(master) to PC2, then sync. Syncthing tries to sync but doesn’t know which one is newer or maybe thinks PC2 FileA is newer so tries to copy to PC1 but can’t since that is a master. Hence the red button. If you won’t hit it the index from master won’t get to PC2 and then it might cause FileA from PC1 to be copied to PC2. But hey, PC2 has it already so it is a conflict and syncthing renames the file…

For the record I’m doing the same right now. Laptop and NAS. over the weekend I copied 500GB of photos disk to disk. Laptop now sits at work. So all that to avoid 500GB over internet. Folder is syncing and I check every 30mins and if there is a red overwrite button I hit it:) I see in your screenshot that it is still syncing 99%, so just keep hitting mate…

With big amounts of data be sure to set a large scan interval. I also noticed that after clicking the red button it takes a littler longer because the other end needs to figure out which files (or parts) to keep/delete/move/etc

The fact that it says out of sync does not mean it will redownload the files. It’s most likely metadata changes such as permissions or mtime.