I have a setup of a Linux-Server, a Mac at Work, a Mac at Home and a Macbook i use on the go and some VMs.

The Macbook was some weeks not in use, maybe a month and i startet it. It syncs with the Mac at home and the Server.

After that, i have many Sync-Conflicts, in every Folder and most git repositorys where broken. (now i know that i shouldn’t sync them ;))

Is putting a Git workspace in a synced folder really a good idea? Support

You can, and it’ll sync just fine, but you shouldn’t. A Git repository is not like a collection of documents. In a collection of documents, each file is mostly independent so it’s easy to “merge” when one file has changed on one device and another file on another device. A Git repository on the other hand is made up of a bunch of files that should be internally consistent with each other. “Merging” two Git repositories that have diverged cannot be done by just copying in the newest files from …

The strange thing is that there are not 2 Versions of the files but a normal file or a conflict file. 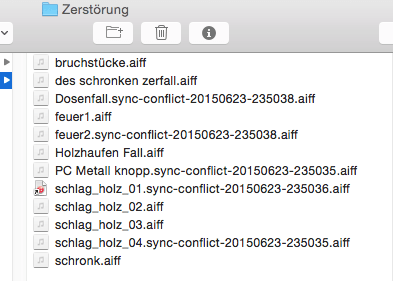 How can this happen? (Maybe i can help to resolve that?)

Could that be resolved?

I have a zipped Version of that Folder from the Macbook. So the Data is not lost, but it should not happen again. I should really have a Backup!

have you looked at the screenshot? there are NOT 2 files.

Right, which means the conflict is between a concurrent deletion and modification.

Did you recently clear the db from one of those machines? It is easy to trigger a conflict if you remove a db when your files are not in sync.

I have not modified or deleted this files in that folder on any node. Some other files have changed.

I think the Macbook updated to 0.11 and generated a new index.

I think the Macbook updated to 0.11 and generated a new index.

That will be the cause, because:

So what would be to solution to this?

But shit happened and many files have this “sync-conflict” string in its name. How do I get rid of it and stay consistent?