Limit for Down- and Upload

By default, the limits are applied to non-LAN connections only. If you want to apply them everywhere, please check https://docs.syncthing.net/users/config.html#config-option-options.limitbandwidthinlan.

I don’t understand this…

Do I have to type that in the syncthing window?

You need to go to the Advanced Configuration → Options.

OK, I found it, thank you very much!

Now it should you the limits I defined in Settings-Connection-Rates?

I know I might be stressing but when I use the limit also for the LAN, why is it not using the limits I defined?

Since you’re seeing lower than configured: setting a limit doesn’t guarantee it will reach it. There may be other bottlenecks. Otherwise: screenshots, so we can see what’s going on. A common error is confusing the various bits- and bytes-based units that can be used for display and the configuration which is in kibibytes per second.

Thanks for your reply,

But why should there be a bottle neck only during the limitation and when I end the limitation the bottleneck is gone, so it can only be Syncthing, right?

You define the limit with KiB/s but while the transfer/sync is running it is shown in MiB/s wich is MegaByte/s, right? Tha’t why a was talking about MiB/s.

The first one shows a file commander to see what’s possible over the LAN here. 285MB/s.

Than you see a Syncthing speed without limitation. 119MiB/s.

Then Syncthing Limit 112MiB/s and speed 58MiB/s, some days before it didn’t went above 35MiB/s., so today it’s better but still not close to what’s set.

PS: The manual about SyncThing is fine but it only explains the function, not how to set it up, that’s a big differnce… 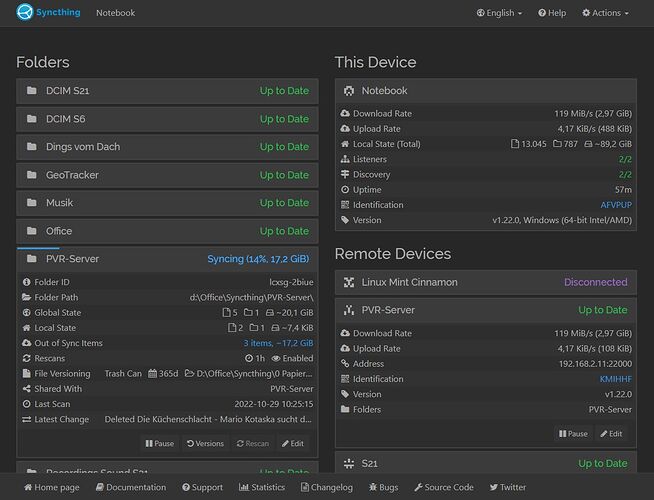 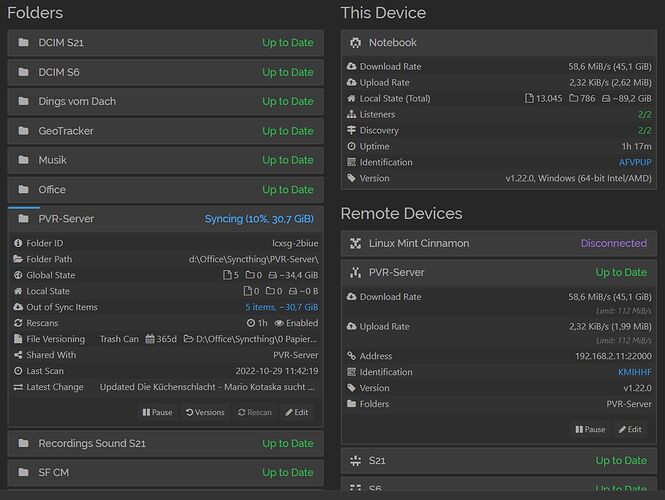 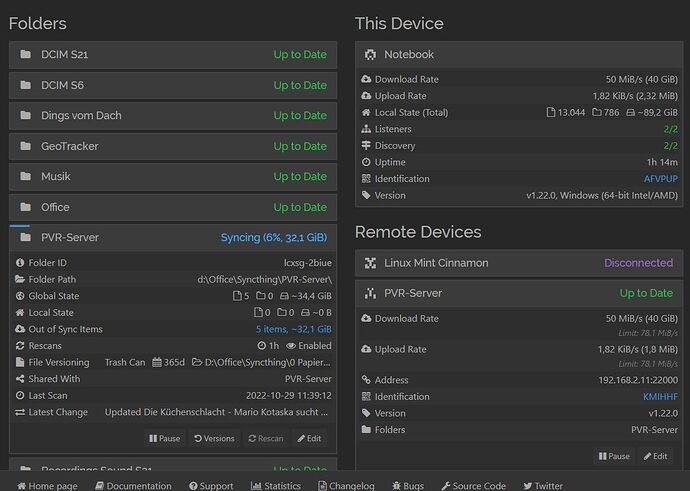 You can’t directly compare transfer speeds using a file manager and Syncthing. The latter does a lot of processing, which among others includes encrypting and decrypting the data, etc. A lot of that depends on the hardware too, e.g. you’re not going to get good transfer speeds with a very slow CPU.

What is the hardware in this case specifically?

OK, forget about the file commander but:

SyncThing with limitation of 112MiB/s: 58MiB/s.

That might be an artifact of different calculation intervals. When Syncthing transmits something, it will count how many bytes have been transferred and after a certain period, compare that with the bandwidth limit. If the ratio is too high, it will wait a bit before transmitting the next block. Not quite sure about the details, but that should be roughly how it works in general. So you will have peaks with higher transfer rates for single packets / blocks, but on average it will roughly hit the limit.

Now a file is finished and some preparation is necessary before the next transfer. During this period, your speed will be at zero, before it starts transmitting the next file. If you now take an average over some longer time interval, these periods will lead to a lower overall average rate. Just like the limiting itself has instantaneous peaks (because 1000 MBit/s LAN just works at that rate for every transferred frame), but on average will stay close to the configured rate. If you take the average over a full month, your data rate will be even lower because most of the time nothing needs to be transferred.

So it’s mainly that the bandwidth indicator is not a very precise instrument to judge what is going on. And that Syncthing does a lot of things besides raw data transfer which will reduce your average rate, to keep your data safe and manage interaction between a nearly unlimited number of devices.

SyncThing with limitation of 112MiB/s: 58MiB/s.

That’s odd. You might want to file that on GitHub, with screenshots of both scenarios.

That’s odd. You might want to file that on GitHub, with screenshots of both scenarios.