I have synced my Pictures folder from Windows laptop to FreeNAS (using plugin). It’s about 32885 items, ~489 GiB and took almost 2 days to complete over 100Mb lan. The problem I face now is that ALL files on the NAS side are named like .syncthing.IMG_4608.psd.tmp :

This is the source: 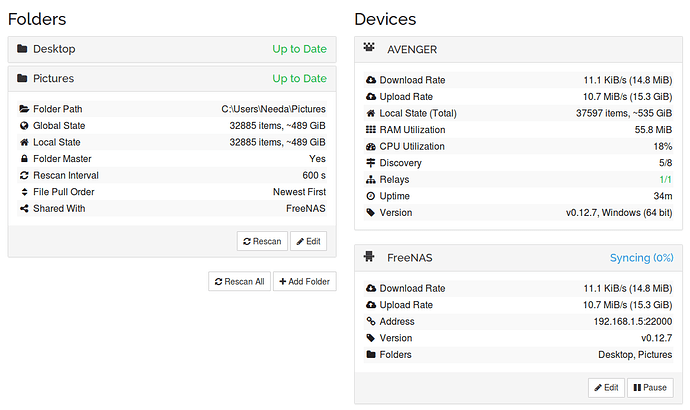 This is the destination: 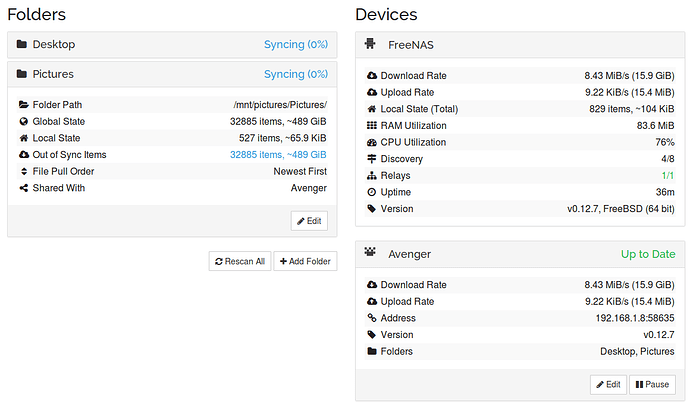 Am I doing something wrong?

Is there anything in the log? It seems it hasn’t finished yet. If you click on out of sync items, you should see progress.

Thanks for your reply. Do you mean that the tmp files are not containing actual data yet? 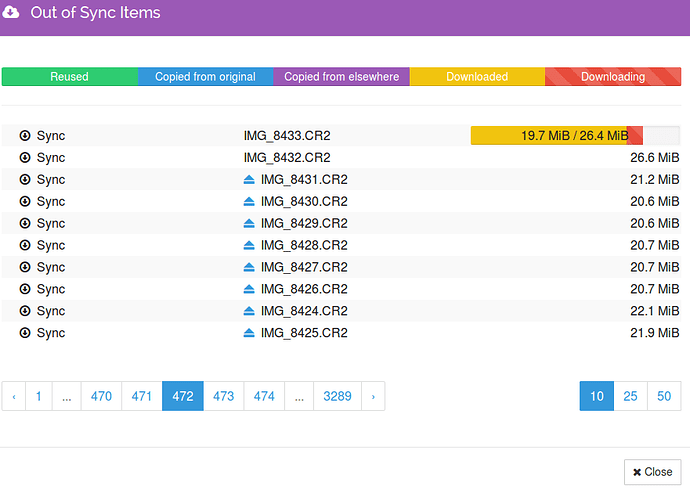 Pasted image881×630 57.1 KB
Just place holders for the files I’m receiving? If the client is not sending them any more where are they stored now?
AudriusButkevicius (Audrius Butkevicius) December 8, 2015, 12:32am #6

I don’t think it’s placeholder files. It’s still sending stuff across, the fact that you have temp files means the transfer could have been interrupted, etc, or it’s actually currently working on the temp files.

Also we truncate all files to the right size, so it could look like the files take up space, but they are actually empty.

Wait for it to finish before making conclusions.

I see your point. However the number of out of sync items matches the global state items for almost 2 days. So it’s difficult to see if there is any progress.

But still has tmp in it’s name and I’m confused about when I should expect my files to be renamed to their original names.

That’s why I am asking whether there is something in the log. The fact that the transfer is showing that it’s downloading to me (as well as the rate being 10MB) implies that something is happening.

Sorry but I cannot seem to find the logs of syncthing in the FreeNAS jail. Do you happen to know where to find it?

Well it logs to stdout, so check whatever method you used to set it up.

OK I managed to set it up to log into file by adding italics to the command in /usr/local/etc/rc.d/syncthing:

Now I can see these kind of errors:

If I’m not mistaken the plugin is running as syncthing user adn the folder and file permissions seem to be set properly:

Why is this chmod necessary and how can I make it succeed?

It seems the solution was to edit permissions of the volume from the GUI and change ACL type from Windows to UNIX.

I did some googling but it’s not obvious to me what “Windows ACLs” in FreeNAS actually means in practice. However it seems to remove the ability to chmod, which we need unless you check “Ignore Permissions” on the folder.

The question remains if only the chmod step fails and checksums do match why does syncthing download the whole file again? 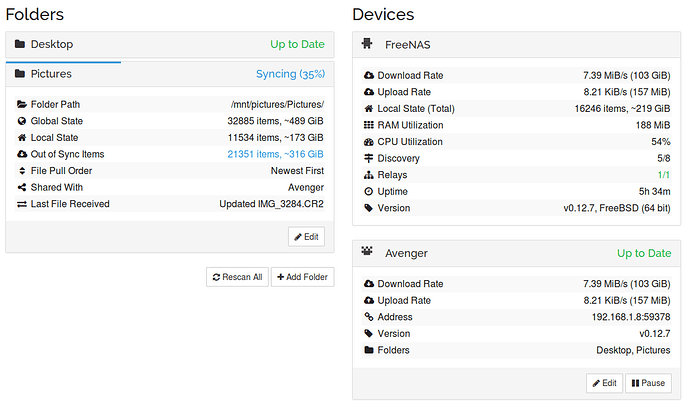 It doesn’t, it reuses the temp file. But after 24 hours, unused temp files are thrown away. So probably that’s what happened as you say it’s been syncing for a couple of days.