I went through couple of posts here and I still have doubts.

I will be syncing from Mac folder /Users/user(this is the single common root folder of all the folders I want to sync) – but I want to include ONLY the listed folders and ONLY THESE; nothing else.

Do I need to do anything else? Maybe something like this? Or what I have done above it sufficient?

Now do I even need to do this as well? Since my root/sync folder will be “/Users/user” I think it won’t even scan anything outside it, right?

Also, does the order matter? Do I need to keep certain include/exclude patters above/below one another in certain order for them to work or for them to be optimised?

Essentially what will be the simplest/cleanest way to achieve this?

Syncthing ignore patterns are folder-relative not absolute, and first match wins. I suggest starting with small and simple and using trial and error, instead of building a castle on paper up front.

This is not castle on paper! This is my trial and error. I tried many ways but I am not able to figure it out. I have this specific use case so instead of trying to type some other example and then again getting confused I presented the entire folder hierarchy as it is.

I went through the doc as well but it was not helpful (yes, I have seen couple of posts where commenders have have just replied “it’s in the doc”).

So I posted here hoping someone might have gone through a similar use case and can help me.

Sorry, I presumed this was “on paper” since none of the patterns would work as written. As said, think “first match wins” and “folder relative paths”. If your folder root is /Users/user and you want to sync only /Users/user/Movies, start with

(“Don’t ignore Movies; Ignore everything else”)

Build from there, adding patterns as required.

Well, just that worked like a charm! I think I was unnecessarily thinking more complex rules.

I will share my test/dummy example (in case others have this use case):

I created this test file/folder hierarchy inside my root folder (i.e. the added folder for sync). 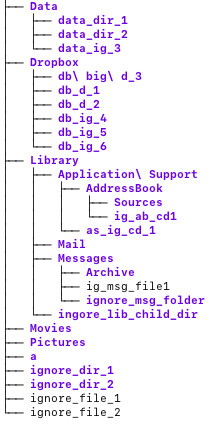 And then I only wanted to backup these out of the heirarchy above.

All I had to do was add this in Ignore Patterns:

That’s it - ignore everything and then invert (with !) path of what you do not want to ignore.