Hub & Spoke "Out of Sync" Issues with Deleted Files

First, thank you to the team who develops and maintains this wonderful FOSS software. Syncthing is truly a wonderful tool in a multi device environment.

I’m hoping for some advice on the following issue:

I run 5 devices connected together with Syncthing in what I would consider a “Hub/Spoke” configuration.

The following connect as spokes to the Hub:

All of the “spokes” report through their interfaces (Web, SyncTrayzor, Mobile) that their folders are “Up to Date” with the Hub. When you look at the Hub’s Syncthing web interface it shows all of the spokes are “Out of Sync” with files (usually 1 or 2 files) that are less than a MB. Sometimes the file was a temporary file that was created when LibreOffice was editing the file, sometimes it is a file that was deleted on one of the spokes. All of the files that are noted as “Out of Sync” on each spoke are from a different spoke, and none of the files currently exist on any of the spokes.

Is there anything that I can do to tell the “Hub” that everything is OK?

The files don’t exist on any of the spokes, they are not supposed to exist, they are not files that are being actively edited on one of the spokes. On the Hub’s interface it does say that the folders are “Up to Date” which I believe is true, but where all four of the “Devices” are listed those are all listed as being “Out of Sync”.

Here are some screenshots of the interfaces to show what I was describing.

This one shows “hpenvy” a “spoke” with all the folders “Up to Date” with the “Hub”. 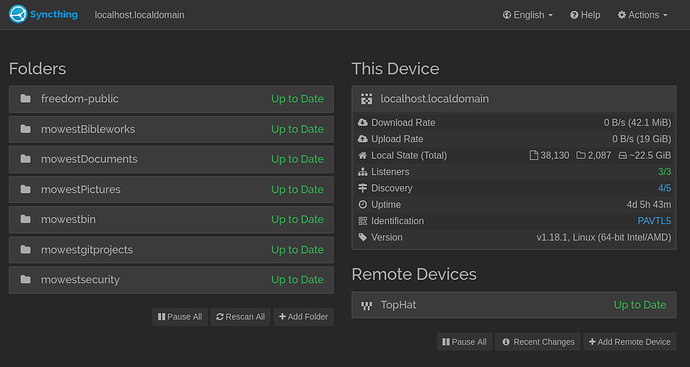 This shows all of “Spokes” still trying to sync with the “Hub” 0 B files. They are all stuck at 95%. The two that are disconnected are because they were shut off at the office, but earlier today when those computers were on they were also stuck at 95%. 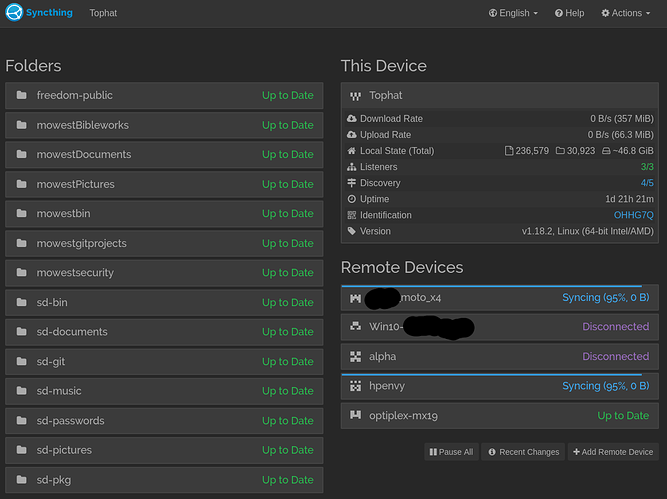 This final screenshot shows a the file that is out of sync. Notice it is 0 B and it has been deleted off of all of the “Spokes” as it should have been, because I purposely deleted it. 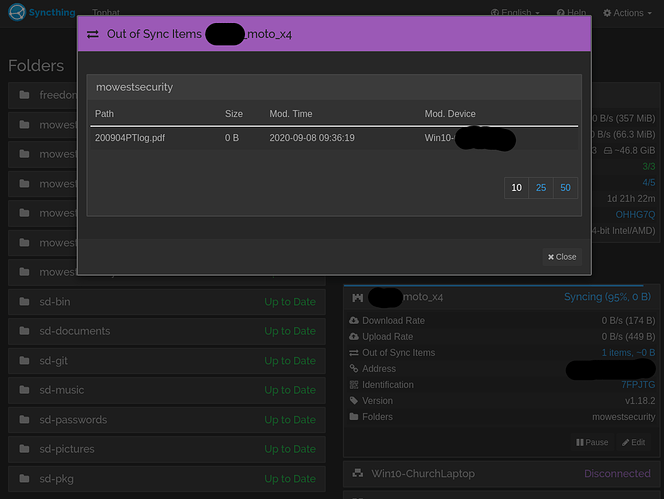 Are the other devices also connected with one another, or only with the “hub”? If it’s the latter, are those files perhaps ignored on any of the other devices? If yes, this could perhaps be https://github.com/syncthing/syncthing/issues/7474. Also, do you use the current or at least a recent version of Syncthing everywhere?

The “Spokes” are not connected to each other. They are only connected to the “Hub” or in this case a server called “tophat”. I have not implemented any ignore patterns on any of my devices. All of the computers connect to all of the folders listed that are called “mowest*” except for the cell phone. It is only syncing one folder so that it has access to a keepass file and some text files that I pass between systems for active notes. As I mentioned all of the files that are “Out of Sync” have been deleted, and I checked they are not on the “Hub” either. I believe that on all of my computers I am running 1.18.1 or newer. Good questions though, thanks for asking for the clarifications.

It seems that something may have been corrupted in the database, but it’s likely impossible to know the culprit after the fact. A non-destructive action to perform would be to remove the affected folders on the affected “spokes”, and then re-add them there at the same paths. Syncthing should re-index the existing data without re-downloading anything.

Ok, @tomasz86, I think I did something wrong. I removed the affected folders on two “spokes”. I stopped “sharing” those folders from the “hub”. Waited a hot second, and then from the “hub” shared those folders again. In their respective interfaces (web for one and mobile for the other) I got notified that the “hub” was sharing a folder with me. I accepted and set up the path to same folder that I had used previously.

Now for the results: 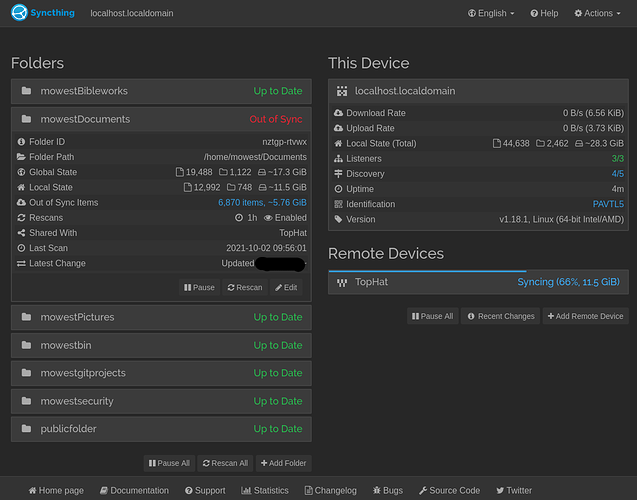 Now on the “spoke” it sees that folder as “Out of Sync” and is stuck at 66% syncing with the “hub”. Interesting enough, the 11.5 GiB seems to be double of what is actually in that folder which I used du -h /home/mowest/Documents and it said there was 5.8 GiB in the folder.

I’m not sure why the “Hub” seems to be happy with the re-index, but now both of the “spokes” think they are out of sync. This is the opposite of the problem I started with, and appears worse, but I don’t think I have lost any data at this time.

The situation doesn’t look very promising, to be honest, as I myself have experienced similar cases in the past, and all of them eventually ended up in doing full database resets on all devices

How about trying to do the same thing yet again, this time removing the folders physically too? Basically, you remove them from spokes both in Syncthing and from the storage, then you re-add them and let everything download again.

Just a last comment, but please be very careful with manual recreation of .stfolder. Doing so in an empty path can easily result in mass deletions on the other devices.

Ok, @tomasz86 I have attempted this on my “spokes” of the android cell phone and on my home desktop.

Thanks for all of your help @tomasz86

Glad that you’ve managed to solve the issue

Just a comment, but you don’t necessarily need to fiddle with config.xml. You can access almost all of the settings using the Advanced Configuration in the Web GUI. This is what I usually do when changing folder paths and such manually. The advantage here is that you’re less likely to mess something up by a typo, and also that Syncthing doesn’t have to be restarted to apply the changes.

@tomasz86 thanks for that encouragement to check out the “Advanced Configuration” in the Web GUI. I never investigated that before. That does enable me to change the folder path. Thanks for the hint. So many wonderful features, what an awesome FOSS project.