Howto install manually Syncthing in a NAS DNS-320 (with funplug 0.5) 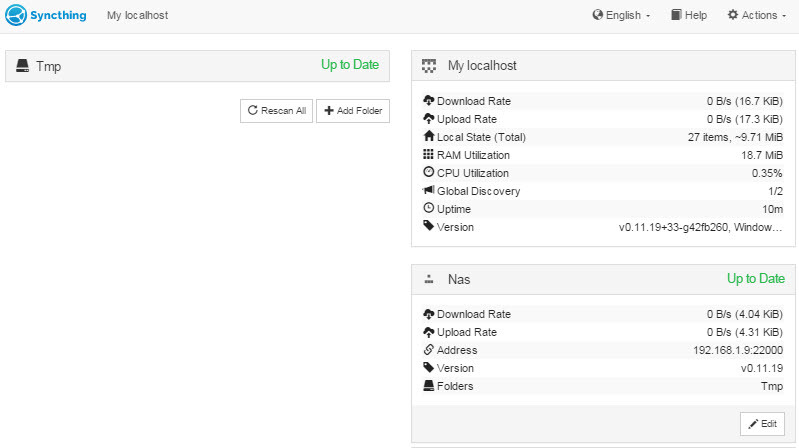 I accomplished it with this procedure :

Ok it works, but I have still some problems :

I suggest you read the manual of the device you are using to learn how to auto-start syncthing (as it’s different depending on the operating system, usually you could just start it from /etc/rc.local) To keep syncthing running when you disconnect you can add & disown at the end of the command to send it to the background.

With this system make a script ffp/start/syncthing.sh

But it don’t lauch because no option “no-console”, I think

Use bash as the shell instead of sh. -no-console is only for windows, to hide the console window.

I am a newbie with Linux … Many thanks, it works fine !

Now I want autostart Syncthing, I have make in /ffp/start/ a script syncthing.sh:

Howto adapt it with bash and @ disown ?

I have no clue, it’s your device, read the forums, I don’t think you need disown for the startup script.

I have found a solution with this /ffp/start/syncthing.sh:

With a copy of the Syncthing database in /ffp/var/

Syncthing launches correctly, but then I cannot be any more connected with Putty or Filezilla (refused connection), and the other process (Mediatomb) don’t launch at startup !

Well this script (as far as I understand as I have no clue about funplug) is supposed to be executed by the startup system, and not by you, hence why it takes over the console. See if it works after a reboot, as the init system should deal with that.

Yes it works after a reboot, but after this the others process don’t launch correctly, and I cannot connect to my nas with Filezilla or Putty.

If I launch this script manually as root (sh syncthing.sh start), no problem)

It would seem that syncthing block the suite of startup

As I said, you should google around for instructions how to set this up on your system, as it’s outside of the scope of syncthing.

Ok I understand that it must be a problem of fun_plug and not of syncthing. But I do not understand why other startup scripts (eg. Mediatomb) return the hand after execution, while that of syncthing does not make it.

By waiting to find a means so that Syncthing returns the hand after his startup, I found the beginning of resolution: rename the script “syncthing.sh” to “autostart-syncthing.sh”, to make it carry out in last, what lets the others scripts put in the directory /ffp/start/

That’s not a good option.

You can write another script /var/run/syncthing-wrapper.sh somewhere else which does:

and then change run_rc_command to point to that.

At the moment, my procedure is therefore the following:

Howto install manually Syncthing in a NAS DNS-320 (with funplug 0.5)

3 - Move the directory of the database Syncthing /ffp/home/root/.config/syncthing to /ffp/var/syncthing

7 - Configure Syncthing with the web_GUI in your browser with the adress [ip_of_your_nas]:8384

You can see the messages of the console in the file “ffp.log”

@AudriusButkevicius : thank you very much for everything !

Thank your for your tutorial, it works just fine.

But I encounter an issue, the transfer speed on LAN is very slow. It is below 10 Mbps. Meanwhile BitTorrent Sync can reach 40 Mbps and higher.

How can I improve transfer speed on my LAN?

You most likely can’t - it’s a slow device, and syncthing does more work than bt sync.

Thank you for answering.

Until I buy better hardware, I will use Syncthing with small files.