How to set up syncthing in android

I have installed syncthing on my linux pc and laptop, no problem works great, however setting it up on android with my phone and tablet is a nightmare, for me. 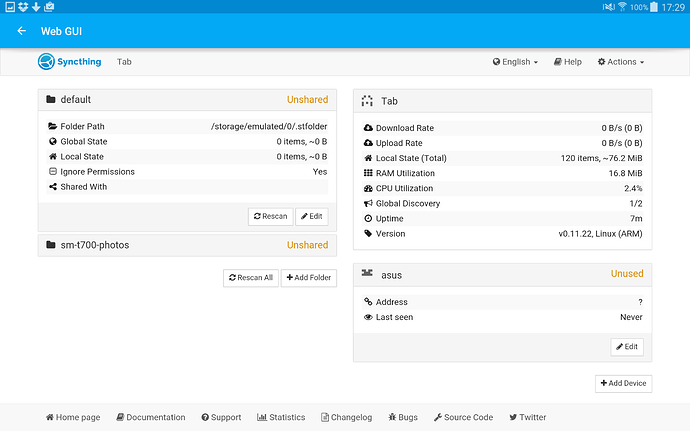 I really like this application and it would be even better if I could get it to work with the android devices.

Adding devices is not working out either! I add the device id of the linux devices but they do not seem to be found!

Is there a version for raspberry pi?

Sure, the standard linux builds. If you’re running raspbian, the debian (apt) packages should work fine as well.

Thanks Canton7 for your reaction. I have had another look at the settings and changed the path to the Default folder (/storage/emulated/0/.stfolder/Default), rescanned and restarted, the image shows the result. Make sure you’re running version v0.12.x on both your asus device and your android: it looks like your android is running v0.11.22, which isn’t compatible with v0.12.x.

Ok, thanks, I’ll check that.

Also, whatever you are doing with .stfolder here, is not right.

I tried to make the dir .stfolder … /storage/emulated/0/.stfolder, that works but I can’t get to the dir to add files.

On Unix systems like android, putting a “.” at the beginning of a file name makes it hidden. So most apps will not show the .stfolder because it is marked as hidden, some will allow you to show hidden files though. Also the /storage/emulated/0 folder on android is strange. I don’t know for sure but I get the feeling it is meant to be hidden from us, not all apps show it. I have to navigate to /sdcard/ to get to the emulated storage in a lot of apps.

Why did you choose to put your shares in .stfolder?

".stfolder"is an empty FILE which syncthing tries to create in the folder selected for syncing in order to check that it has write access to it and to mark it as a real sync folder(folder that it knows about). So you should not create an “.stfolder” FOLDER. In rare cases you could create “.stfolder” file but that is not one of them. How do you know that it works between your PC and laptop? Do you have folders synced between them? Could you post screenshots from them? And also as canton7 mentioned you should run either 0.11 or 0.12 on all of your devices since they are not compatible. Your tablet shows that it is running 0.11.22. Is this the latest you see on the market?

/storage/emulated/0/ is the primary memory, same as /sdcard/ (on all devices I’ve seen).

Thank you all for your replies; in answer to your comments/questions:

I don’t have time at the moment but when I do I look again at your advice and start over with the android shares.

.stfolder is supposed to be a file inside the directory you are trying tk share, not a folder name for your share.

In a post in another thread I mentioned manual creation of an “.stfolder” FILE in the folder one wants to share as a workaround of another problem. You should not need to create one by hand. Syncthing for android creates a default sync point(folder is not correct since it does not create any folders) because 99% of the time that is what users want to do on mobile devices when installing some syncing software - sync their photos to a PC. You could remove that sync point and create a new one just as you did on your pc and laptop. But I suggest first to add the pc and laptop as devices and then when creating the syncs on phone and tablet you just select which devices you want them to sync to.