How can I get rid of "Failed Items"

A box currently shows up as “Out of sync”. Looking into the details, I can see that I have two “Failed Items”.

Since I started using syncthing, I finally have my desktop, home-server and laptop properly in sync. I took the opportunity to clean up a lot of my mess. This meant rearranging some folders here and there, moving files around.

The two files in question are tiny auto-generated files for “rope” (used in Python development). Think of them like ctags files. They are unimportant, and can be regenerated at any moment. The path where syncthing looks for those files no longer exist (due to the moving around bit).

For me, it would be more than enough to just acknowledge this state on the box in question. Essentially manually update the status of those files as “removed/deleted/moved elsewhere”.

Is there a way to do this? Or is there another solution?

Generally speaking, you get rid of them by solving the cause for them being failed. The GUI should show the failure reason?

It reports that a folder (.../.ropeproject in this case) is missing. I simply created an empty folder at the right place, hoping ST would pick up on it and let me delete it again.

After creating it, it says the following two files are missing:

I’m a bit wary to fiddle with those, as I don’t know what they should contain. Feeling adventurous, I decided to simply touch them.

You can remove them, the fact that it says no pull source available means that tge files have changed before we managed to sync them, so you need to rescan on the originator.

How can I find out which box is the originator?

Good question, I don’t think you can do that easily. Look at which node is up to date.

I have all 3 out of sync. But all with different files. It’s very difficult to sift through them with the existing UI. Files often have the same name, and the complete path is only shown on mouse-over. I have a node with 1400 files out of sync. I’m not going to mouse-over all of them

I would love to have a list somehow and tell ST in bulk to just ignore most of these files.

What I meant with:

I would love to have a list somehow and tell ST in bulk to just ignore most of these files.

was that I would love to be able to ignore the “Failed items” I have right now. Somehow remove them from the DB so that ST can re-discover them (if they still exist).

Here’s a screenshot of the status from that node: 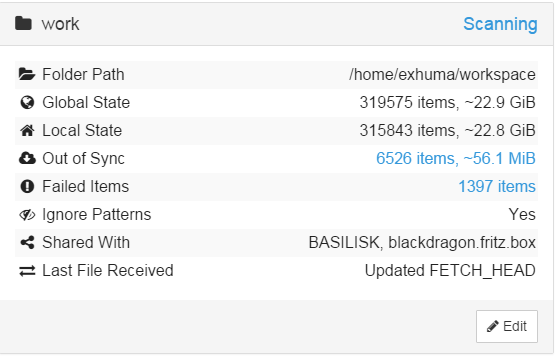 I suggest you resolve the issues in the failed items, in hopes of making progress.

Would it be worth having giving a client the ability to trigger rescans on its peers? That would provide one way of resolving the “no available source” issues in a timely fashion without waiting around for a rescan to happen naturally

We should solve it differently, the source should check if the mtime of the file matches the one in the index, if not, rescan to rectify this.

Have the same message sometimes. This occurs since latest syncthing version update. It happened mostly on “old” files I did not use for weeks and yes on files I recently moved. Had never seen that message before. Renaming the “out-of-sync” file was enough, I then had the surprise to find twice that file - one with its initial name and one with the newer name - both correctly sync’d !

Maybe you could try a “batch” renaming of your files ?