These are the values of a OnePlus 3T with Android 7.0.0. Consumption remains high even after all files have been synchronized. Under the settings “Experimental” the point “keep processor awake and service with foreground priority run” turned on. Can anyone report of similar behavior? Can something be done about it?

It would be useful to know if the CPU usage is caused by the Android wrapper, or by Syncthing itself. I tried with the Battery Historian tool, but that doesnt show seperate stats for each. Most likely its caused by the Syncthing binary itself, so it would have to be optimized there somehow.

I would guess that it’s the Syncthing “core” inside the wrapper. It’s not mobile optimized. Among other things it will attempt to keep connections to all configured devices. This means continuous network traffic and, in turn, keeping the the CPU and WiFi or Cellular interfaces continously active.

The other Android app takes another approach and is probably better at this, although immature in other areas.

Perhaps you can carry out the measurement with the option “Synchronize with wifi only”. So you could determine the consumption once with wifi so with Symcthing and wraper together. And once without wifi, I assume then only runs the wraper.

@calmh My wife has a OnePlus 2 with Android 6.0.1 and the consumption is lower with her. However, it has only two folders in sync, while I have twelve. 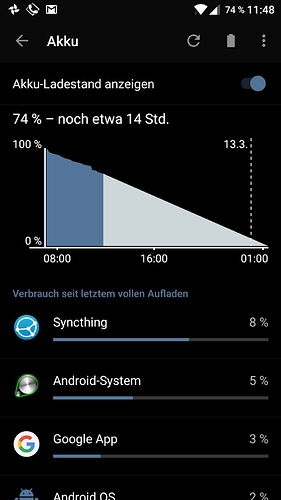 Certainly the number of folders and devices will affect how much work it has to do.