Has anyone considered "FUSE" functionality?

Might make life easier if things were more isolated from existing filesystem. Of course depends on use case.

There was a syncthing-fuse project that someone worked on.

It’s not maintained anymore however.

So, do you think there are valid arguments against it?

If not, I might try to poke at it.

not sure what you mean by against it.

I guess if your question is how you think it should be integrated, I think you should start by resurrecting that separate application and get it to a working state. Given the feature is only usable on a unix, and doesn’t need half of the bells and whistles that exist in syncthing, so it makes sense to start externally.

Once it’s mature, I guess it could be moved to syncthing itself.

There is at least one library that does FUSE functionality on windows. Whether it uses FUSE itself, I don’t recall.

Let me try to dig up the project you were talking about and I’ll ask for directions if I can’t find it. 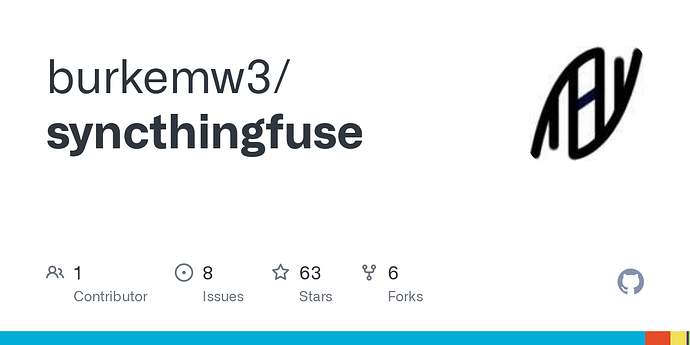 Contribute to burkemw3/syncthingfuse development by creating an account on GitHub.

yeah that’s the one I’m refering to. There is no fuse for windows, there is Dokan for windows, but that’s not fuse, requires a custom kernel driver, etc, hence not very usable.

Yeah, in addition to Dokan there is winfsp which has the same drawback. I should read more.