After the update, I see this message on two computers that I use.

" For the following folders an error occurred while starting to watch for changes. It will be retried every minute, so the errors might go away soon. If they persist, try to fix the underlying issue and ask for help if you can’t. Поддержка

It works on my Windows 10 computer which also runs version 1.1.0.

No. One of several local HDD

Are all of these roots of the drive?

@AudriusButkevicius: Yes, it happens for roots of drives. I have several and the error is the same.

I am also seeing the same message, it does not appear to be impacting sync. My share is the root of a non-OS drive, with a few excluded folders (and excluding System Volume Information).

Are all of these roots of the drive?

For me it also happens on the root of a non-boot drive.

If anyone with an entirely watchable (i.e. user readable) drive and have/can install go, could you please post the output of running (go run notifyWinRoot.go) after adjusting the drive letter variable to whatever applies to you: https://gist.github.com/imsodin/dbbbbd4c662cd16f66c1a9281a3df9ed 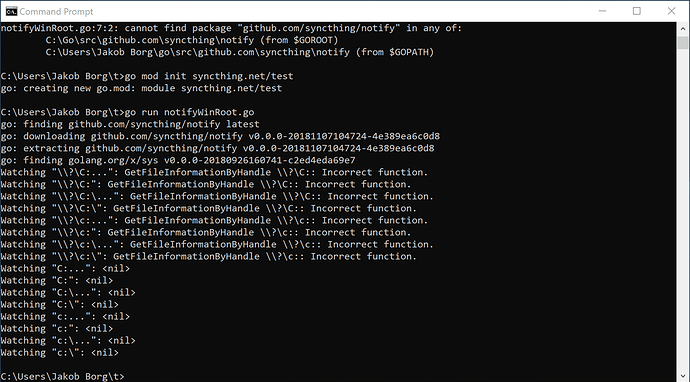 If you’re still looking for output:

Thanks for testing. I am a bit confused, as I wasn’t able to find any relevant change to how paths are treated between 1.11 and 1.12 (as trailing backslash seems to be stripped in 1.12). Unless someone else is motivated to dive into this, I’ll have to get debugging on windows

What do you think, should we do a “hotfix” on our side? (e.g. stripping \\?\ for drive letters when calling Filesystem.Watch)

Do we need \\?\ anywhere at all any more? Go 1.8 (!) added a change that should use long filenames “when possible” which I think should cover all the regular OS stuff. Maybe the filewatcher library does need it if it does direct syscalls, but then it could fixup the path to whatever is the right format, and maybe only do so if it’s longer 260 chars etc?

Need possibly no - at least I don’t think we use syscall or x/sys for anything FS related and I hope that path/filepath, if it needs to interact with the filesystem at all, does it through os. However it also shouldn’t hurt and the notify library definitely uses syscalls.

I would really welcome any sort of hotfix for this issue! I tried to work around the problem by making the NTFS volume available not only as D:, but also as a directory beneath C:, to no avail. Windows just resolves that link to the physical location D:, so I was back to square 1.

The immediate hotfix is to disable watching for changes, relying on periodical scans to detect changes. However you’re right, at least a dirty fix should make it into the next release - it’s on my todo now.