Discovered remote addresses without an error

Something in @tomasz86 issue on github caught my eye that isn’t relevant to the issue there, thus now in the forum. Screenshot from there: 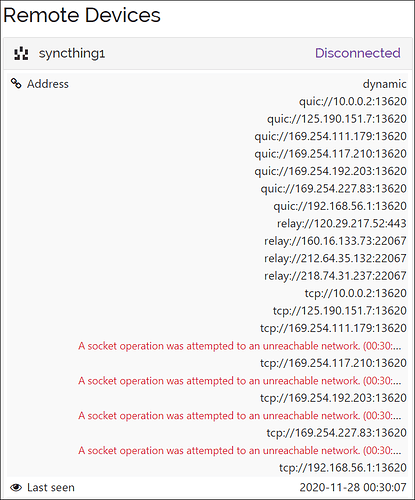 What is confusing me: Why is there a ton of addresses without an error reason? If there isn’t a successful connection, shouldn’t all known addresses be tried and thus generate an error?

Could it be that the device just became disconnected and those are the only addresses it’s tried yet?

That would make sense.

Speaking of that, yet another unrelated thing: It would be nice to sort those by priority first, then alphabetically (though super low importance).

Could it be that the device just became disconnected and those are the only addresses it’s tried yet?

Probably does not matter, but just for the record, the screenshot comes from when I was testing encryption. It was taken right after Syncthing had automatically disconnected due to the folder type on the receiving side being set to something else than “Receive Encrypted”.

Also, this is not really a “device”, just another instance of Syncthing running on the same machine. I guess that this may be the reason for a lot of funky addresses and ports.

Ok, thanks for confirming. Then my initial question is answered: There are no errors because the connection has been established before and thus lower prio addresses were never tried.