Devices don't see each other

Last week I changed my hw router, and since then some of my local syncthing devices don’t see each other (but other devices synchronize fine as before). I have no idea what’s wrong, I see no difference in configuration between the working and non-working devices.

All the devices are in the same LAN. On the router, I have uPnP enabled, and there are 250 records from 8 syncthing devices: 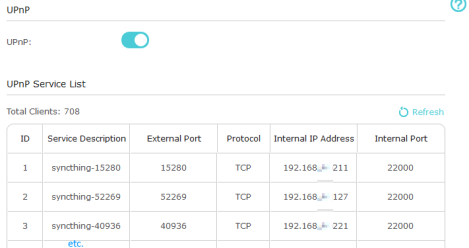 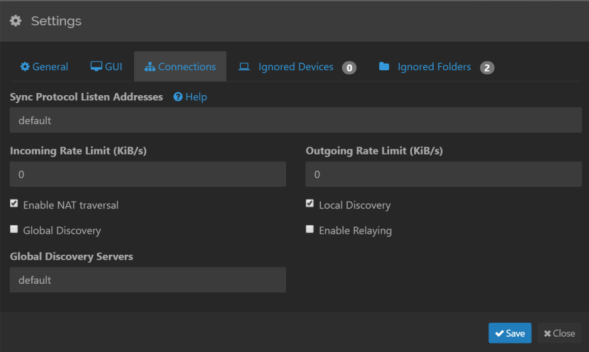 However, on the devices that do not work now, I had Global discovery turned on, by mistake. The synchronization stopped working after I upgraded the router, so I turned Global discovery off, and it still doesn’t work.

In syncthing, I tried to remove a problematic device and add it again, but it didn’t help. I didn’t change firewall configuration of the devices, so it should be correct.

What can be wrong?

Turning global discovery off certainly doesn’t help with anything (the opposite would be true), however the story “router upgraded and now LAN connections don’t work” almost certainly sounds like the router is blocking multicast/broadcast or local connections for some devices.

Next step would be to check multicasts, this is very likely the issue. Turning global discovery on is circumventing the need for broadcast/multicast (because LAN addresses are announced to the discovery server), so it should work if all devices have global discovery turned on.

EDIT: I just realized you said that connecting did not work when global discovery was on, so I’ve updated my explanation accordingly.

PS: Another thing just came to mind: Check your network settings on the Windows machines. Especially check whether your local network is set as a “public network” in Windows. The Windows firewall randomly blocks all kinds of stuff when you’re connected to something that Windows considers a “public network”. The router switch could have caused some devices to create a new network profile, which was set to public.

Even though I configured the router the same way as the previous one, I didn’t realize that it’s MAC address is different. Hence Windows changed the network profile from Private to Public, and the notebooks didn’t see each other. After changing the profiles to Private again, everything started to work.