Deleting directories in a cluster

I’m using the Syncthing v0.14.26 Linux (64 bit). I’ve setup a cluster of 4 nodes - A, B, C and D where A is the master (Send only) and the rest 3 nodes are slaves (Send and Receive). Directory X is being synced between all four nodes in the cluster. The problem I’m facing is that when I delete any sub-directory in dir X on node A, it is not being deleted on the remaining three nodes. Instead, I see them as out of sync on the web GUI. The ‘ignoreDelete’ option is set to False on all nodes.

Is there anything else I need to configure? I’ve read similar threads on this topic but they didn’t seem to help in my case.

This is how it works. “Send only” protects that device from changes from the others. The others are free to sync between each other. You want the “receive only” folder type which doesn’t current exist.

Shouldn’t changes including deletes on the “Send only” instance be propagated to other “Send & Receive” instances?

I misread entirely what was happening. This should indeed work just fine. Check the other devices for errors.

I checked the errors on the other devices. They show the that they’re out of sync along with a list of failed items. This is what I see on a slave device (Node B, C and D):

On clicking ‘Failed Items’ I see the error ‘directory not empty’ for all deleted directories and their sub-directories. 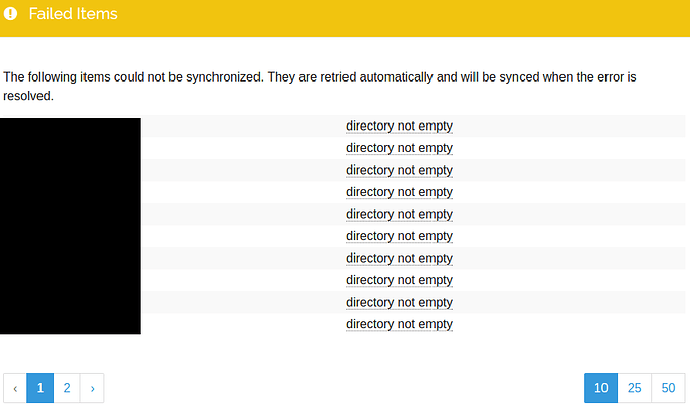 Does syncthing not remove a non-empty directory?

No. The directory would be empty if all files in it were tracked by Syncthing, though. The most common reason is that there are ignored files in those directories. If you want Syncthing to remove ignored files that are in the way of directory removal, use the (?d) prefix in the ignore patterns.

Adding the prefix worked! Sorry for all the trouble, should have read the .stignore documentation properly

Just one last question- even when each node shows that it is up to date, the syncing seems to be stuck 100%. I checked the web GUI for all four nodes and there does not seem to be any conflict.

And thanks for the quick help! Really appreciate it.

There’s been various issues with the completion percentage not reaching fully 100% in the presence of ignores, but I had hoped I fixed them all. Maybe something around the send only stuff remains.

Oh. I’ll look for errors in the logs to see if I can get any more information pertaining to this issue.