Sorry if this question was asked too many times.

I have two machines, Speedball2 and Speedball. Speedball2/Music is shared “send only”. Speedball2 reports that everything is idle/green/in sync. Speedball reports that the folder is green and up to date BUT the remote device Speedball2 is permanently at 95%, and there are about 4050 files not up to date (but none is being downloaded!).

The files are indeed identical (md5), and do exist on both sides. The issue persists since probably 4 or 5 months.

Is there a quick fix? e.g. delete the database? I would guess the the issue is on Speedball (i.e. the receiver).

p.s. this seems a common problem, so I would suggest to take countermeasures in the software itself (it’s definitely not normal that a device is not up-to-date, but ALSO idle… if this persists for more than N days, I would expect the software to do something… wipe its own database and restart, or so).

I suspect the content might be the same, but the metadata (mtime, permissioms etc) are probably different, hence its out of sync.

permissions are ignored (on the receive side).

is there a way to get the list of these files from the db? I am unsure whether the simplest fix would be to delete the files or delete the entire db.

I mean, sure, whatever is easiest, but without understanding the cause, you’ll probably ene up in the same situation again, so

Deleting things randomly can also lead to bad state, situations, so suggest you backup before you go on your deletion spree.

So, what would you advise to investigate, precisely?

One simple thing I could do is MOVE away a couple of folders, let syncthing think that the files were deleted, and after a while stop the service and put back the files.

I suggest you compare the out of sync files to see why they are really out of sync, on more than content.

FYI, here’s how I solved. I just noticed that all the out of sync files were in two specific folders, so I connected with ssh and moved the two folders away. Syncthing (it’s a receive-only machine), did a rescan and decided that there were local changes. At this point, I paused the folder, put the files back, un-paused and clicked on “revert local changes”.

This fixed everything, but it didn’t solve the mystery. It was neither a file content issue, nor a file attribute issue (as I put back all the files exactly as they were).

ok, I think I have an update.

The two machines deterministically go back in this state. But I have no clue why.

files that are listed as out-of-sync were not touched e.g.

Do you have any advice on what to investigate, precisely? TIA

as far as I know, nothing ever touches these files. and even if something did, syncthing should just sync the “changes” (given it’s a simple send-only folder, and the receiver has “ignore permissions” set), not stay idle forever…

DO you have screenshots of both sides to better explaint he situation?

thanks for your help. here are the screenshots: 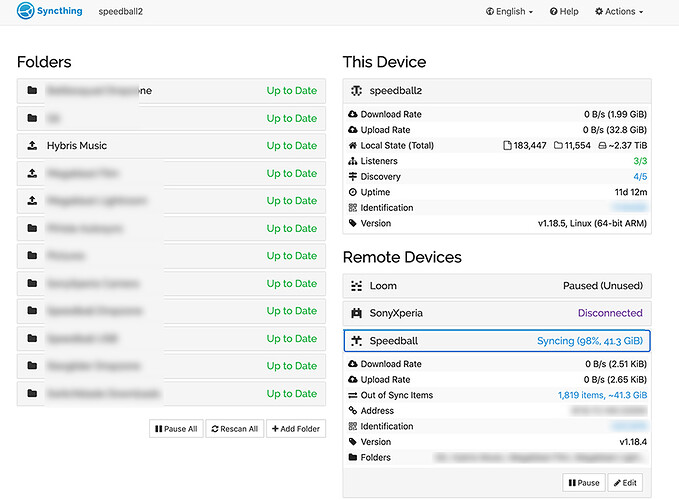 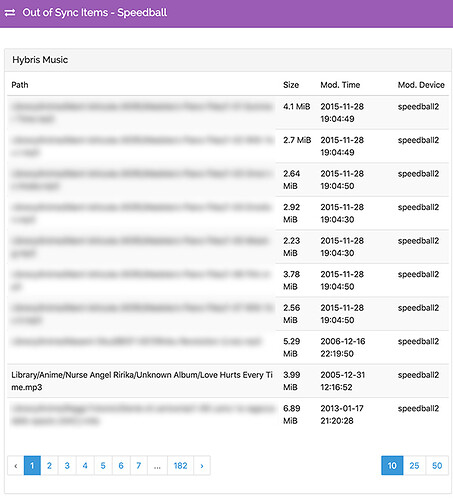 note that the file is unchanged since 2016. md5 matches on both sides. neither the file nor its attributes were changes in ages.

what’s even stranger is that the receiver now is perfectly happy: 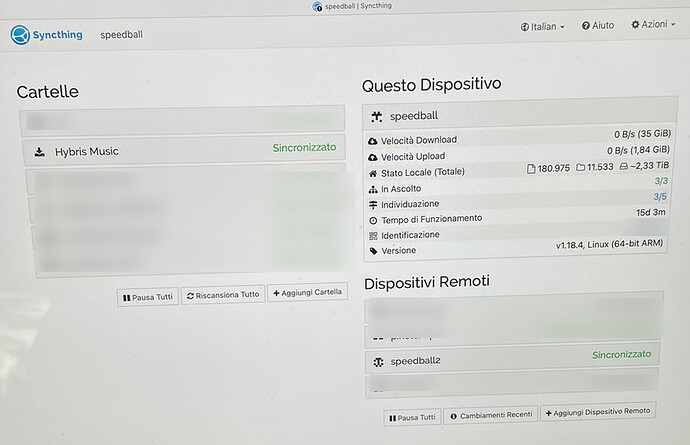 so it may have deleted the files locally (this machine is in a remote location, I don’t have direct access to it).

Does this imply that there’s an issue in the sender?

Additional info: the receiver did delete the files, but not the folders. IF I ssh into it, and rmdir one of those, Syncthing will say “local additions”. So it’s indeed convinced that the folder is empty…

Are all the other folders up to date?

Also, the one that is visible, not sure what that status means? The color looks orange, but I assume it means its synchronized?

Can you post screenshots of both of the folder states from each of the devices.

I assume all the problems are in one folder?

Sorry for the excessive blurring. I removed the things that are not relevant to this ticket. 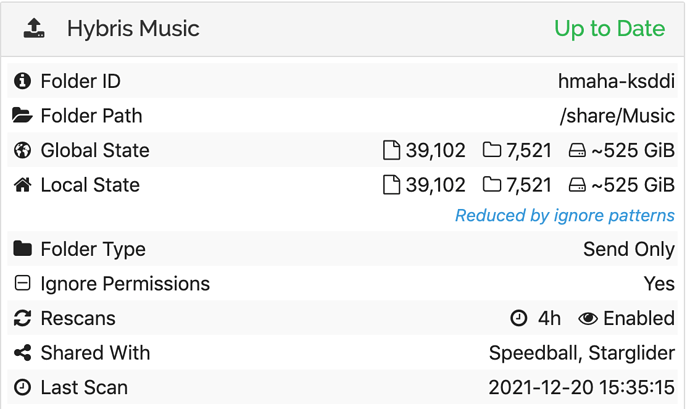 this is the folder state in the sender