I’ve been using SyncTrayzor since the beginning and now I’ve just downloaded SyncthingGTK for test purpose. I’d like to know where to :

The SyncthingGTK thread is closed, so I can’t post there. And there doesn’t seem to be any similar topic in the forum.

Any help is welcome.

I’m not sure where Syncthing-GTK keeps Syncthing’s config, but a glance at the source suggests it’s the same location. So just installing Syncthing-GTK may well work

copy SyncTrayzor index database, if applicable, to avoid SyncthingGTK having to rescan all the shares.

There’s no such thing: Syncthing has an index, but it’s nothing to do with SyncTrayzor. It will be stored in %LOCALAPPDATA%\Syncthing.

Hello @canton7 and thanks for the quick reply.

I think I’ve sorted it out, by copying only the config.xml file from the source to the destination. Don’t know how indexing will go, but I’ll wait and see.

You should be able to copy everything. Like I said, both SyncTrayzor and Syncthing-GTK just let Syncthing get on with its own database management.

Yeah, but I still haven’t found out where Syncthing-GTK stores its database. I’m running SyncTrayzor Portable, so I just have to move the “data” folder when upgrading. I thought it was generated by SyncTrayzor.

EDIT: You say you copied config.xml. The database should be in the same folder as config.xml, in both Syncthing-GTK and SyncTrayzor.

Genius ! I admit I haven’t paid attention to it, so yes, everything was in the directory. I’ll copy it now to prevent Syncthing-GTK rebuilding all the index from scratch. Thank you !

By the way, what made me try Syncthing-GTK is that Syncthing et SyncTrayzor processes have lately being hogging all the disk (usage @ 99-100% permanently), almost freezing the computer. I’ve even had two or three BSODs and force-restarts over the last weekend.

I still can’t tell if it’s ST itself or the wrapper. Nothing has changed in my config, I think it occurred after the Syncthing 0.11.13 upgrade.

Do you have any idea ? Is it even the appropriate place to discuss this, or should I open another thread ?

You could also run syncthing on its own (no wrapper) and see if that hogs your disk.

That’s the point : both hog the disk, either alternatively, or simultaneously (in this last case, when I’m not present to stop both processes, I’m quite sure to get a forced reboot + the loss of current work

I repeat, it didn’t occurred so hard before (excepted for the initial building of the index).

I’ll keep doing various tests and try to determine what is wrong in my config.

What files are being accessed? Resource manager will tell you.

Thanks for the tip. Mostly Syncthing.exe. I’ll see how the next update address it. Thanks !

What files were being accessed? Syncthing’s database, your documents, something unrelated, etc?

Mainly database and my files. 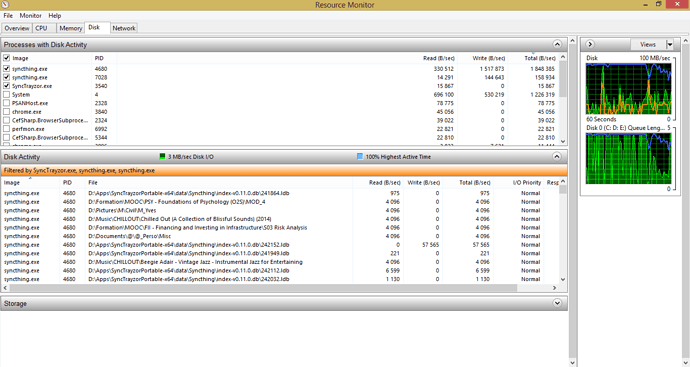 PS : just got the notification and upgraded to Syncthing 0.11.15.

What does Syncthing say its doing? Scanning, etc?

Often scanning directories that have already been marked as synced weeks ago! Mainly my Documents (17GB) and Music (72GB) folders.

Apart from that, this is what I get most of the time (I hope it could be useful to you) : 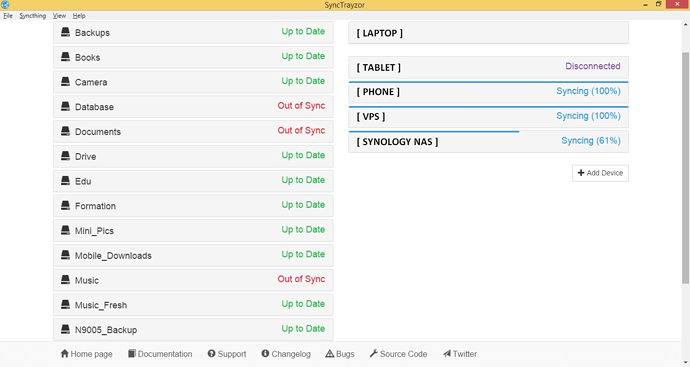 Note that ‘Scanning’ means ‘looking for changes’. It has nothing to do with whether it’s synced - if it didn’t scan, it wouldn’t know if anything changed that it has to sync (note that SyncTrayzor mitigates this to an extent by looking for changes as they occur, so you can set a longer polling interval in Syncthing and have it scan less often).

Noted and thanks again !