I have an issue with syncthing instances on different timezones. I am able to reproduce this issue all the times with my setup. I wasn’t able to find any similar issues online, and I apologize is this is a duplicate post.

After syncing the first version of the file, subsequent edits of that file on the local system will create conflicts.

I believe this is because the saved file in the VM for backup is setting the last modified timestamp in UTC and time the laptop is setting for the same file is in US/Central.

This causes constant conflicts when editing documents locally on my laptop.

This is also getting in the way of deleting files. When a file is deleted on the laptop, upon a sync, the file will sync back from the server and reappear.

Let me know if I can provide other information and if I did something wrong with my setup.

Just to confirm, are all devices running v1.23.0? If not, are there perhaps any devices on v1.22.0 or v1.22.1? If yes, then please make sure to upgrade them to the newest version as those two had bugs that could trigger such conflicts.

Started my tests from the beginning making sure all is up to date (v1.23.0 or up)

I also found out a post where you mention NTFS on linux. Looks like that might be the culprit, though the windows side is not working as well.

Here is a screenshot of the conflict details shown on windows 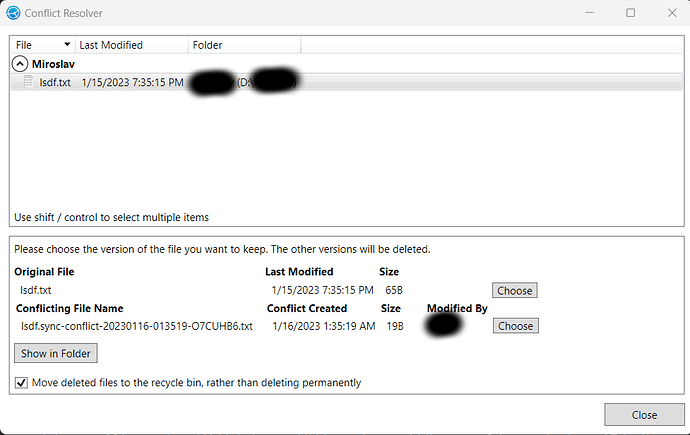 I would appreciate any ideas and guidance. Let me know if there is anything else I can provide to aid with this.

Probably NTFS-on-Linux behaves insufficiently like a normal Linux filesystem, failing to retain some attribute Syncthing expects. I’d suggest setting ignore permissions and perhaps a mod time window of one second or so and see if that helps.

Are you using ntfs-3g or the new in-kernel ntfs? Afaik I am still using ntfs-3g and there I do set “ignore permissions” but not timestamp window is needed, that works as expected for me.

If you are running Synching on the same data from both OSes you also need to make sure Syncthing is using the same database in both instances. There are some nontrivial things to take care of to make this work properly, if ever.

I am unsure if it’s using ntfs-3g or the new in-kernel ntfs. I do have the ntfs-3g packages installed.

Noted re the syncing same data from two different systems and will only rely on one to sync going forward.

I also updated the docker timezone to match and continued the tests and I am still able to reproduce. Tested with 10 seconds and 60 seconds set for mod time window (set on both the laptop and server) and it’s still reproducible.

After setting the ignore permissions, I am not able to reproduce anymore.

Thank you so much all!