I have 2 devices on the same LAN I want to set-up. Although I’ve manually specified the address on each instance I see the connection type being reported as “TCP WAN”

LE: both are docker instances on different machines.

LE: both are docker instances on different machines.

If the two Docker instances aren’t using host networking, they’ll each be on separate private LANs provided by Docker Engine.

Indeed they are using “Bridge” mode networking. I wonder why the template I’ve used defaults to this. Physical hosts are on the same LAN&subnet. This is the other guy: 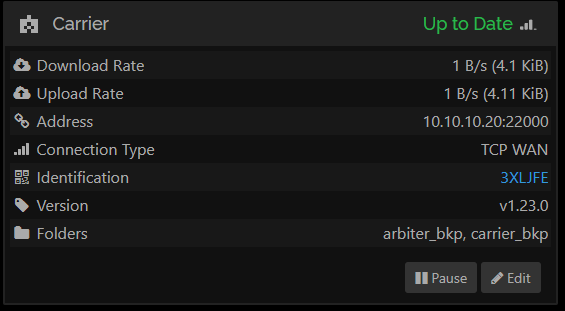 I’ll give it a shot in host mode. Thanks!

Was going crazy thinking it’s due to syncthing’s settings. Although I did have a hunch it might be because they are dockers I did not follow through with debug on that end. Thanks a lot Inspector @gadget !

Thanks a lot Inspector @gadget !