Hello everyone. I am seeing a strange error message on most of my hosts, complaining that syncthing is unable to remove a directory, such as:

The thing is, the error doesn’t indicate why it’s trying to remove the directory (I didn’t ask it to), nor do I understand why it matters if the directory is empty or not. I have removal set to “staggered” and to delete anything older than 14 days. None of my nodes have had Syncthing installed for more than three days, so I don’t know what it thinks it needs to delete.

In that example, I don’t know why it would want to delete that folder, it is set to ignore in .stignore and shouldn’t be touched. I didn’t ask it to delete my git folder, so I’m really confused.

Is this a bug perhaps?

I've setup a staggered versioning in some of my repos. Pretty often after I delete/rename files on the other end, I...

OK, saw the other part of the post as well. So, the reason it would want to delete a directory would be because another node told it to.

Thanks for the reply and link to the bug. It’s strange though that it would be trying to delete anything at all, since no file is up to 14 days old. Perhaps that’s part of the bug.

In regards to the second error, In my .stignore file, on all hosts, I told it to ignore this git folder by including “git” in .stignore. Perhaps that was not the way to do it?

Ah. There are other issues unfortunately with ignoring files that have already been indexed/synced: https://github.com/syncthing/syncthing/issues/561

Thanks, it looks like a commit was entered based on the bug you linked to, so I’ll just wait for a newer version to come out and then try again. 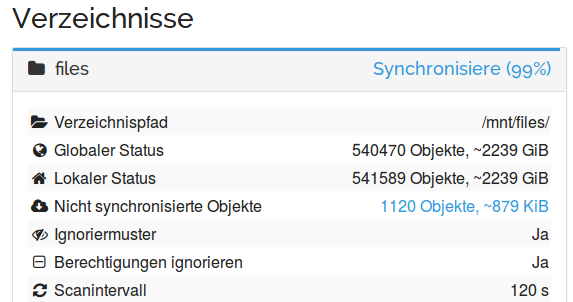 What could I do? Wasn´t there a button for force overwrite?

If it can’t delete directories, it’s most likely because there’s stuff in them, usually stuff that’s being ignored.

Also, while searching for existing issues is laudable, the bug you’re referring to was fixed over a year ago.