I’ve added some rewarding badges, and tweaked the existing ones. This is the current set (apart from the boring forum defaults): 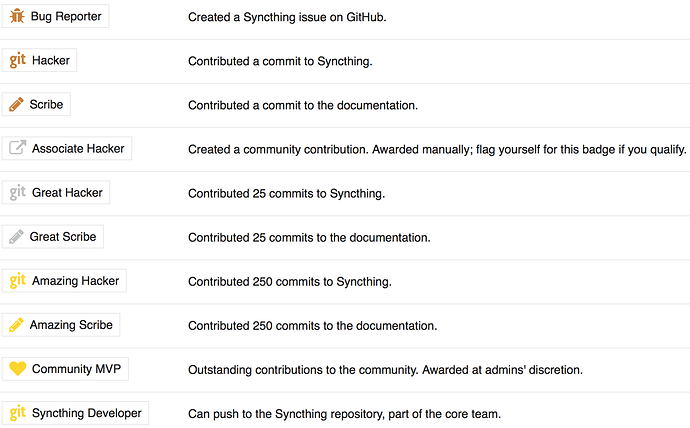 The new ones are the “Scribe” set (awarded for working on the documentation), the “Associate Hacker” one for doing cool work around but not on Syncthing, and recently the “Community MVP” one for being a just generally awesome person regardless of what form your contributions take (i.e. not necessarily code, and if so not on Syncthing itself).

The “Bug Reporter”, “Hacker” and “Scribe” badges are auto-awarded, if you use the same email address here and on Github.

(Yes, this is all fairly silly but it’s in good fun.)

Also automatic, this one depends on having the same username in both places.

(If someone creates 25 feature topics in 100 days, I’ll invent a special badge for them.)

Every time I see the word hacker by my moniker, I go to preferences and select <none> for my title.

It goes away, but the next day I’m hacked off to find it back.

The plugin sets the title when the badge is awarded, if the title is empty at that time. It’s not supposed to force it upon you after that. I’ll see if there’s an error somewhere!

I looked at the badge, and it says git.

I’d rather be called a git than a hacker.

I deployed that as a workaround as apparently the script does set the title again when it’s empty and I don’t have the requisite Discourse skills to fix it right now.