I removed the index database on one of my synched nodes running syncthing 14.29 because of corruption in the DB.

After rebuilding the index I got more then 50000 sync conflicts.

I know that most of them are false alarms (file and conflict file being identical), but there are some files where I know that there is a legitimate conflict. The problem is, I don’t know exactly where. Though I can probably remove more than half of the conflicts without problems that leaves still too many for checking manually.

Is there a fast way to remove the conflict files for the cases where the files are identical and leaving only real conflicts? Is there maybe an option I’m not aware of or a tool?

Is this really the case? It should never happen as there is no reason to create a conflict copy if they are the same.

Is this really the case? It should never happen as there is no reason to create a conflict copy if they are the same.

Yes, it is really the case.

For example, the following screenshot shows Python files with conflicts. I’ve never touched those files after the initial copy in 2013. Files and conflict files are identical. 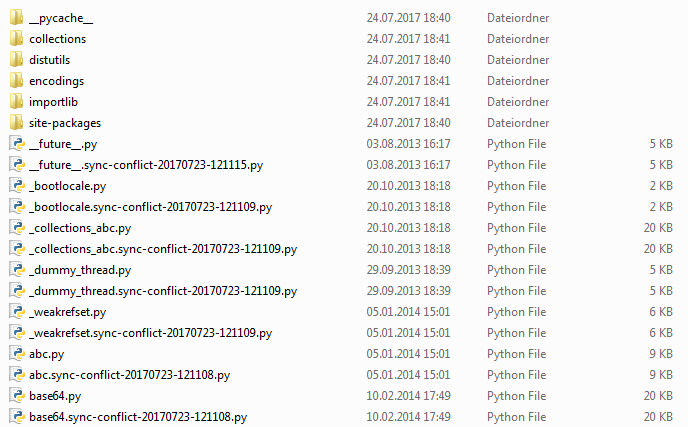 That’s a bug. Which doesn’t help answer your original question. I guess you need some script that compares contents and removes the spurious conflict files when the content matches. Syncthing can’t do this, unfortunately.

Now there is such a script. It’s in Python and reduced the 56k sync-conflicts to 7 - which where valid.

The script is in a working state for my eyes only

but if someone else may need it later on, I will make it available.