i have existing sync connection between android and laptop. it was so: android - internal storage/data_sync > laptop - $HOME/Desktop/All_datas_sync today i want to have my android camera photo folder also synced to my laptop on the same one folder under Desktop, so that it is not so messy with so many folders on desktop. hence i created this sync: android - external storage/DCIM > laptop - $HOME/Desktop/All_datas_sync

after it synced for 30%, i realized i have just created a kind of a loop. the DCIM photos was synced to laptop /All_datas_Sync ( which is single directional sync, *due to android privacy thing of android 8.4 version and above)

is there anyway, to tell syncthing that do not sync this DCIM folder back to android ?

now i am having dilemma… either make a new folder on laptop /desktop (and make the desktop more crowded) or somehow move all my data files from /All_datas_Sync to another folder (which also make desktop more crowded; and ontop of that issue, i don’t know how to modify the established syncthing link to a new location. *syncthing just refuse to change location that easily ***

You can use ignore patterns. But better not have this kind of cyclical setup to begin with.

i hear you. but i am interested to know what and how to use “ignore patterns” ?

is there way to migrate my destination folder location without having to re do the sync link relationship ?

which is to say, “edit the destination folder location”

i read thru the ignore pattern doc, understood, but there is not example which i can follow and modify… i dare not anyhow change, least i wipe all my data or make a mess to repair. .

are you familiar enough to give me an example: let’s say, i don’t want this (bidirectional) sync on this folder to sync back a folder called dcim back to android storage… how to do it in ignore pattern ?

bidirectional sync already established. and is in sync - ok.

i accidentally pasted in a lot of folders and files into “folder b” which is on laptop side. then quickly i paused Syncthing “folder b” on laptop side. erased the wrongly synced files in android (folder a) and WIPE OUT all content of the sync folder (folder b) in the laptop side. now i set laptop syncthing on the laptop side as receive only. and android side remains as both send and receive. syncthing keeps telling me there are a lot of file changes in the sync “folder b” on laptop. it keeps wanting to sync with android which i prevented (else all data will be wiped out as well). how to RESET FOLDER b on laptop side, so that it will behave obediently just "receive " files from folder a (android) into folder b (laptop) ??!

can we have such a button to allow a certain side of folder to “reset” itself and receive sync from remote device ? instead of keep insisting there is something change… folder marker failed… all these nonsense ?

i have this bidirectional sync between android and laptop. the folder is Andrew_datas_Sync but the content of the folder is totally wiped out due to some incident. however due to the folder was being paused before the incident, the data on my android is still all intact. in order for safe prevention (so that syncthing won’t delete all the files on my android as well), i set this folder on laptop as “receive only”, so that android can sent all the files in it’s folder back to laptop folder. but it just won’t happen, keeps telling me “out of sync”… why does it not just receive only all the files from the android ?
it also tells me “folder marker error”…

oh boy, this software is so complicated… 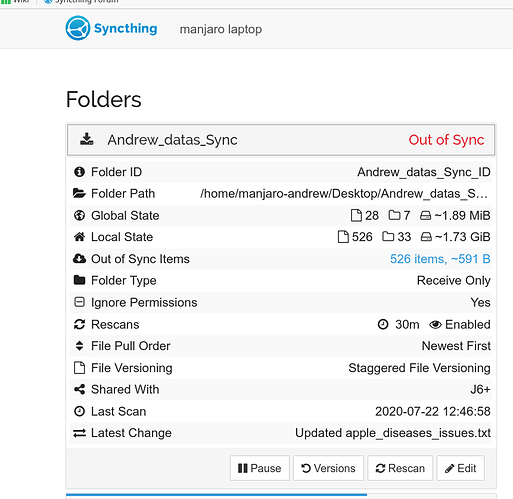 is there a way to make the laptop sync folder to stop telling me out of sync but just sync according to the instruction ? show means just receive the remote files and get done with it ?

Please put in some work yourself and use the search instead of asking questions that have been answered on the forum many times before.

Yes, syncthing is not very user friendly, has bugs and is complicated. Perhaps too complicated for you given that the front page of the forum is plastered with your threads.

why syncthing refuses to sync ?! pees of man… 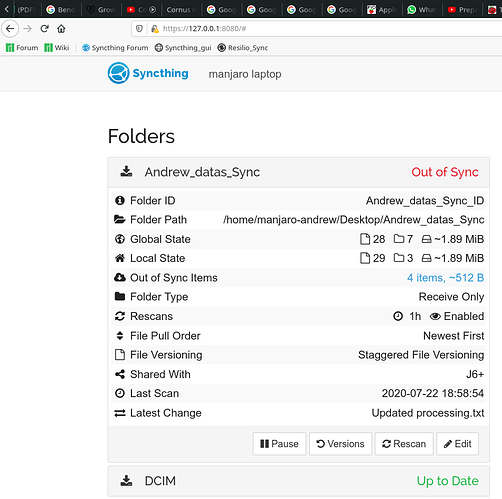 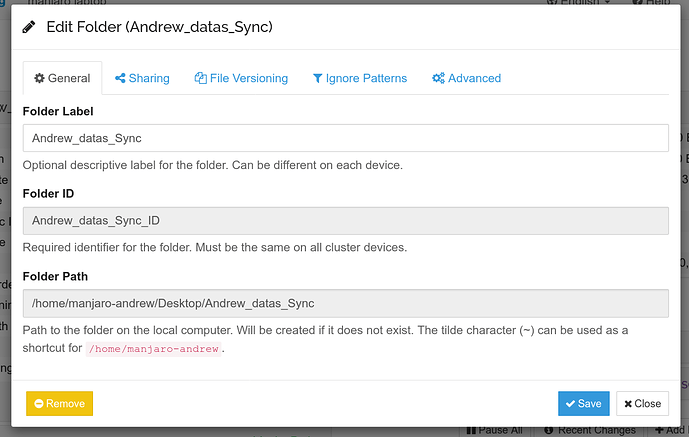 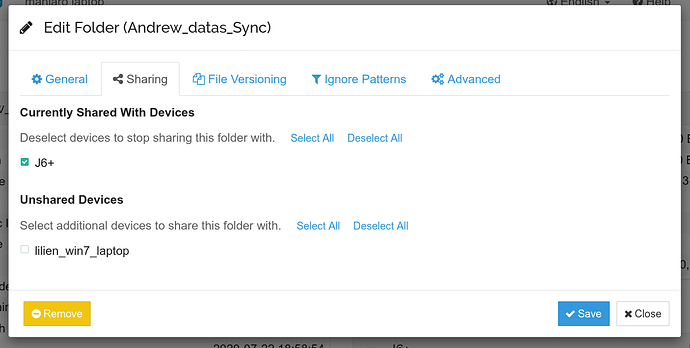 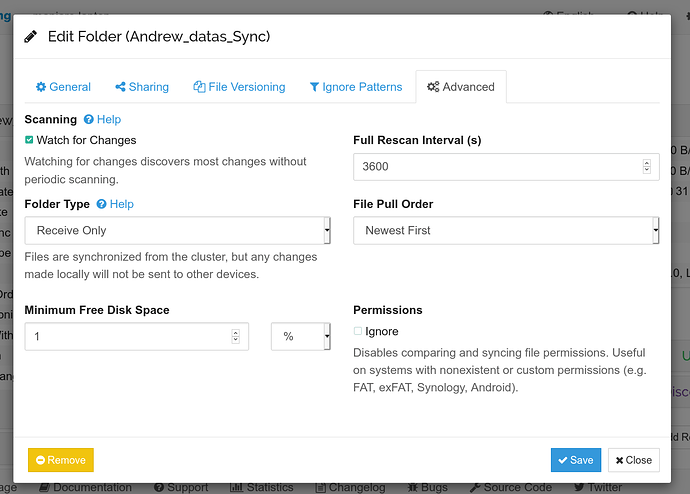 i have cleared the whole target folder (laptop) in hope that it will be resync by receiving all datas from source (android) device… but it just stay there yelling “out of sync”… sync then … you wouldn’t be out of sync anymore.

what’s wrong with it.

I have merged the various threads, as they are all about problems with getting a single setup up and running. Please do not open more topics to get help on that, but provide further information and/or questions in this topic - thanks.

i would like to provide more info so that i can get the problem solve asap, what info can i provide when syncthing gives me no info .

Given you had various problems like nested folders building a loop, I suggest creating a backup of your data for safety (I hope you did that already) and then removing all the affected folders and readding them. Thus you get rid of any leftover broken state. If something isn’t working then, please provide the steps you took and what happened (screenshots) and what you would have expected to happen differently.

i have already have a backup in android.
i have also removed the nested folder that could result a loop this is now back to the original (was working) sync folder between android and laptop already… it should work if there is option to tell it to “forget the past stuff; just follow the user instruction and receive syncing”. how ever, the syncthing just said locally

but sadly it just keep sitting there saying “out of sync”. i really have no idea what on earth is wrong with syncthing with regarding to this folder. why can’t it just sync from android and they will be synced />?

i have wipe clean everything from the target folder on laptop side. 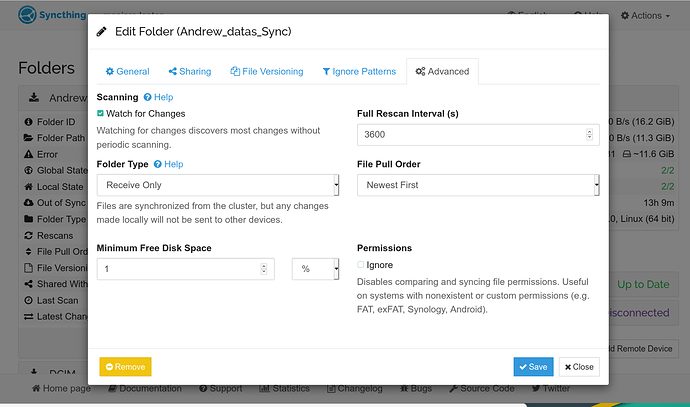 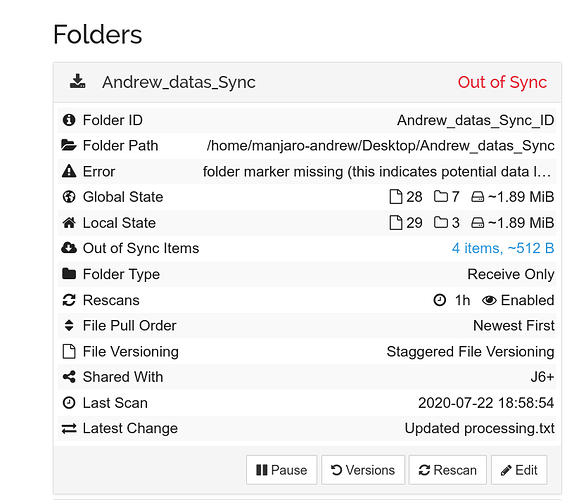 the below is from android it shows 29 files, but i hv counted , it actually has only 27 files… i think the extra 2 files are the hidden folder ? couldn’t be.

btw, what is Global State ? and Local state ?

i have posted all that can.

The error “folder marker missing” is the relevant bit here: You removed the .stfolder directory in the root of your folder. Thus syncthing assumes all your data vanished and stops working. If you did remove the folder and readd it (in the Syncthing web UI) that would have been resolved.

thanks for the help. so folder marker is refering to the .stfolder… ok. got it going already all synced up. tq very much. saved my day