Love the idea of syncthing. Nice work. I just can’t get it to work…

Setup syncthing to backup one folder from a windows server to a path on my asustor NAS. My NAS says 100% Up to Date. But I am not seeing files anywhere on my asustor. Not in the specified folder path or in the syncthing standard folders. Idk if it’s hidden since it is in blocks or if I misunderstand the receive-only usage. Idk if my NAS path is incorrectly configured. Thanks for the help in advance.

Folder type shouldn’t matter here. If Syncthing marks the folders as “Up to Date”, and the local state matches the global one, then this means that the files must be physically on the device.

It’s more likely that the folder path is somehow hidden from the user in the file explorer on the NAS.

Just for confirmation, can you post screenshots of the Syncthing Web GUI from both sides?

Glad it seems to be configed properly. I looked into folder permissions and I am admin over all(I think). Attached pics with notes that you probably don’t need. But thanks for your help and quick reply. 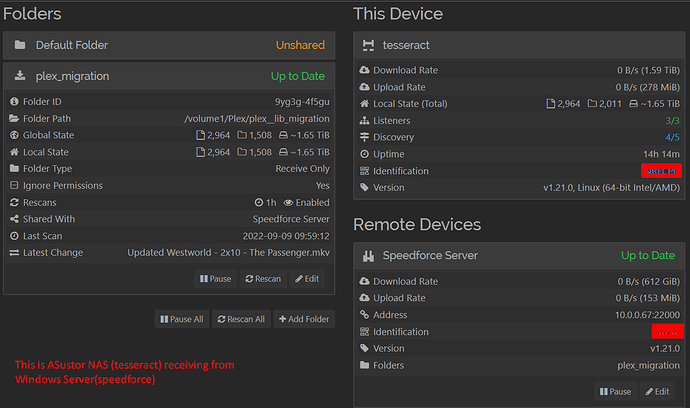 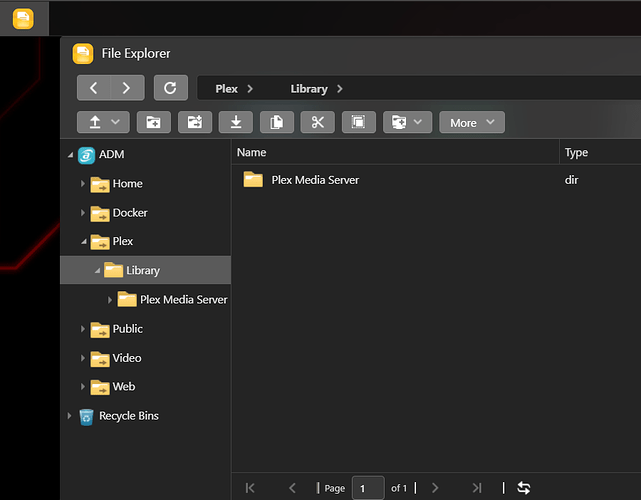 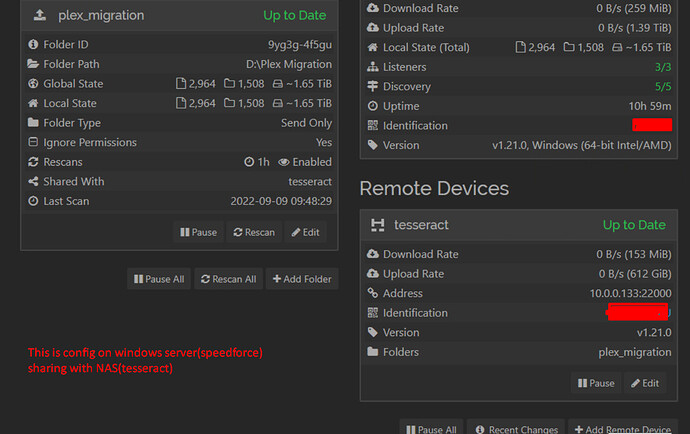 Yeah, so the files are definitely there, but for me, it appears that the Plex folder (or perhaps symlink/shortcut?) that you see in the file explorer either isn’t really located under /volume1/Plex, or maybe the file explorer hides custom folders like yours from display.

Yeah I am certain your theory is correct. I just checked and my NAS says i’ve used 1.65 TB. Which matches syncthing. I am not sure what you mean by symlinks. Where could I learn more about symlinks? How would you explain symlinks to a novice like myself? First time doing this stuff. 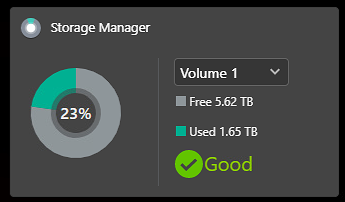 How would you explain symlinks to a novice like myself?

Without going into details, the “folder” structure that you see on the left side in the file explorer may not the actual structure of folders on the disk, and the thing called “Plex” may point at a totally different name/path than what you see in the left panel. The reason why I think that those may not be real folders is that there’s an arrow icon on each of them, and also because similar is common in other operating systems too.

Is there a terminal application or any other way to access the command line on the NAS?

ar is common in other operating

Considering how they have no mention of any command line interface for their software anywhere online and difficulty of google searching I just had. I am going to guess no. I do know that I can SSH according to their site.

Hmm, if you can set up SSH and access the NAS that way, it would be great, but before doing so you may also want to play around with the file explorer first, e.g. right click a folder and see whether there’s any way to display more details, such as its full path or similar. Also, can you copy and paste into the address bar in the file explorer? If yes, you may try to put your Syncthing folder path there and see whether it opens or not.

I have tried the copy and pasting into the address bar. No luck. I will check the properties again and checkout ssh. I will post an update here in the next 24 hours or so.

Thanks so much for the help so far

No luck. AMD is extremely limited in their access to users to default root folders. Even ssh terminal is limited to the folders that by default are shared with my admin user. The root admin is the only user who can see those and I cannot access root. Asustor has it locked down. Guess that’s their tradeoff. Simplicity brings limitations.

Workaround. Left that older structure in sync thing in place and active. Created a new folder shared between the two devices and placed it in the syncthing config folder on adm. Then moved the files on my windows server out of the original shared folder and into the new shared folder. This deleted the files from the invisible folder on adm and resynced them to the new folder that I placed in the syncthing config location which I have rights to. Everything transfered well.

Dissapointed in Asustor but happy I found a solution.

Thanks for the help

Asustor has it locked down. Guess that’s their tradeoff. Simplicity brings limitations.

Yeah, even though they are Linux under the hood, those devices seem to follow the Android philosophy, which is to limit the user from deeper filesystem access or any type of more advanced control really (and very often also sandbox applications not to access anything outside of their own data).