I see something which I guess it’s a bit suspicious, but let me describe my setup first. there are 3 machines: call them A, B, C. A is a linux server; B and C are windows machines. A and B are in the same room. All these machines share a big folder (~1TB): A send-only, B and C receive-only. The files are roughly identical (for A and B, I can verify directly, same files, same dates. C got a copy of the folder with an USB drive, so it’s roughly in sync).

The problem is: if I open the web interface on both B and C, they thing they are in sync and THE NUMBER OF LOCALLY CHANGED FILES IS LOW (it’s 0 on B and 10 on C). This is in agreement with the filesystem check (e.g. if I compare A and B via samba)

However, if I open the web interface on A, I see a very different situation: A thinks that C has 1200 out of sync items, and B has 80000. There’s no activity at the moment, so they are not syncing anything.

This seems odd… Can anybody suggest how to debug/fix?

this is a screenshot of the web interface of machine B, with 10 locally modified files out of 110000:

this is the same folder as seen in A’s web interface: 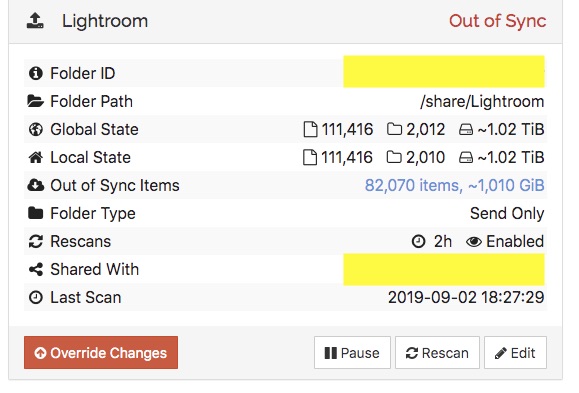 this is B’s status as seen from A: 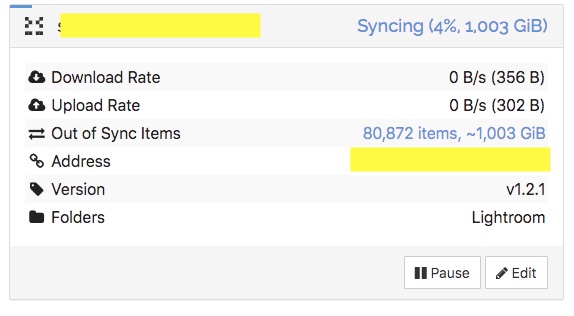 at the moment, I actually “solved” the issue by checking “ignore permissions” in the sharing settings of the folder (both on A and on B - I didn’t touch C yet, because it’s in another location). This forced some resync activity on all the three machines, and eventually now the counters look correct. but I don’t really have an explanation. I vaguely guess that the problem originates from the fact that A is a linux filesystem and B is a windows filesystem, but I’m not sure what happened exactly.

Any difference in metadata (not even data), such as permissions, mtime, etc will cause things to look out of sync. You have the button that overrides changes to try and force propagate the state to the other side on the send only folder.

I don’t understand how A got out-of-sync in the first place. B (and C) doesn’t send any local changes, so how can A ever get out-of-sync?

@m.holmes Is Syncthing on Device A also on version 1.2.1?

They can both have local changes, or potentially the folder types were changed after the state propagated.

So, clicking “override changes” on A will force B and C to realign their files?

My understanding is that a receive-only folder will basically preserve its local changes, unless you press the red revert button on the machine

Indeed I tried the red “revert” button on B, but it didn’t work. B just deleted a few files (which made me suspect that the problem was in metadata).

Yes, every machine has 1.2.1 The only difference is that A runs as a service (so it’s probably executing as root or a privileged account), B and C run under a Windows user (with administrative rights).

So, clicking “override changes” on A will force B and C to realign their files?

It tells B and C to take all the files as they are on A and shut up. If B or C made local changes, you might still need to revert them for that to go through.

I’m actually curious: why the “ignore permission” option would fix this?

I wonder what kind of file permission might differ… Files were copied via samba by the same user who is running syncthing.

Any permission difference would cause this.