I’m doing an initial sync of ~2TB and things were moving along fine (albeit a bit slowly).

For some reason, however, syncing has stopped at about 75%. I tried uninstalling/reinstalling the app on the source side (a ReadyNAS) and pausing/resuming on the target side (an RPi).

What could be the problem?

You will likely need to provide more information if you want to receive some actual help. At least screenshots of the GUI from both sides, and possibly logfiles will be needed to be able to see what is actually going on.

If the database of syncnthing is on the same device as the disk, you’ll probably struggle a lot, as syncthings database usually needs to be on an SSD.

You will likely need to provide more information

Yes, of course, pardon me please.

The screen shots are below:

I don’t know how to find the logs. According to this I’m to look alongside systemd, but I don’t know where that is. A tip or a pointer would be welcome, thank you. 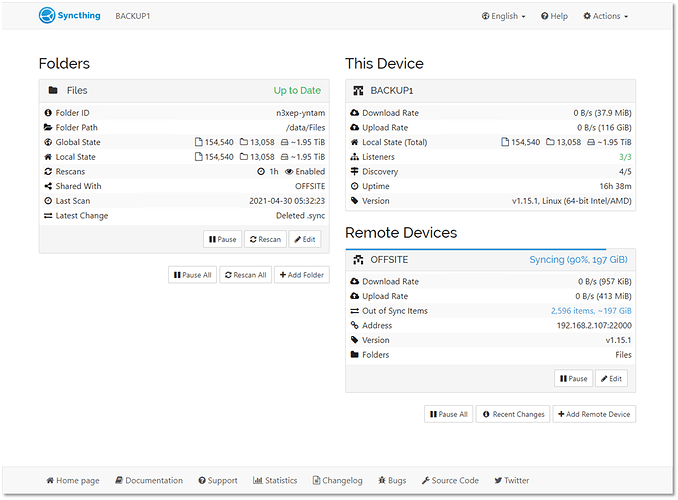 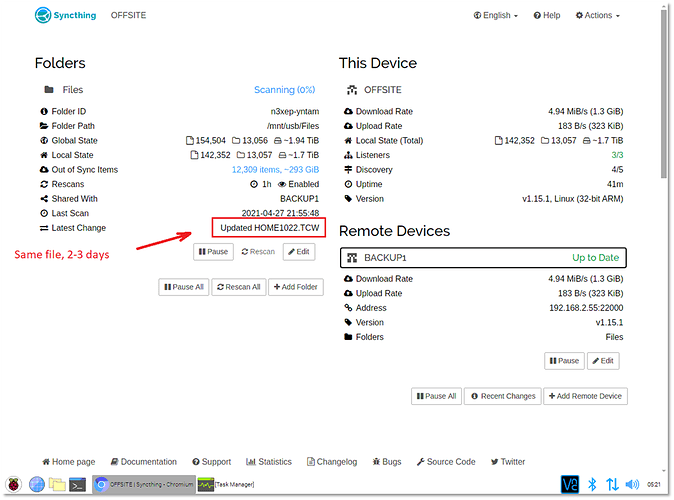 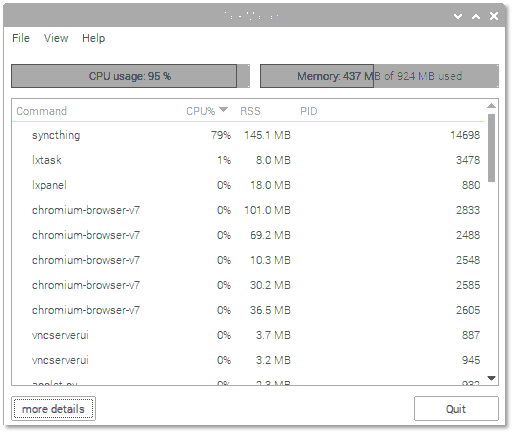 The source device is a ReadyNAS, so it’s headless. Can’t run the Task Manager GUI there.

It is on the source, but not on the target. The source CPU is a XEON processer, pretty beefy. The target (RPi 3 B+) is syncing to a USB drive. Is that what you were getting at?

but I’m not sure how to check on I/O:

You can use the iotop command.

Right now it is in the process of scanning, that has to finish before anything can be synced and if there’s still an issue, be debugged.

it is in the process of scanning

OK, it looks like the problem was a disconnect between the sync engine and the UI. I rebooted the target device and the job suddenly showed significant progress. Apparently files were being transferred that weren’t being reported to the UI.

However, the service doesn’t detect the mounted drive immediately after a reboot. Usually it picks it up after a while, but not this time. I had to click ‘Rescan’ in order to kick it into gear.

Once the current scan is done I expect to be able to see download traffic and to provide a report.

OK, syncing appears to be back on track.