I have a setup with three nodes, I’ll call them A B and C for now.

node A is a Mint linux labtop

node B is a rasperry pi running raspian, this stays at my house all the time

On all three, syncthing is installed from your package repo and I update regularly (none are on a version less than 12.17).

I am getting the following behaviour:

Can anyone suggest possible reasons for this or how I might go about debugging the issue?

Are they set to share the same set of folders? Do they connect to each other successfully? Screenshots of how it actually looks?

Sorry for the v slow reply.

They are set to share some of the same folders, the main one being ‘default’. I’ve attached a couple of screenshots below: 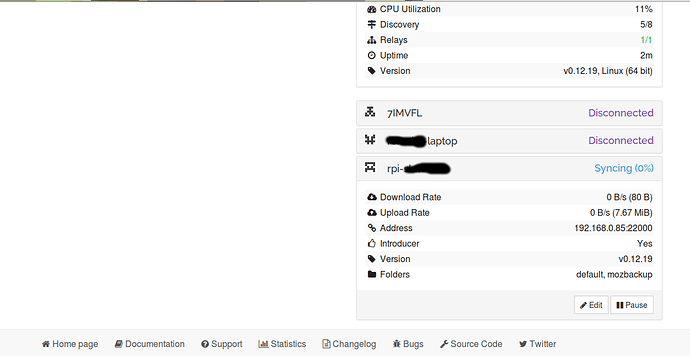 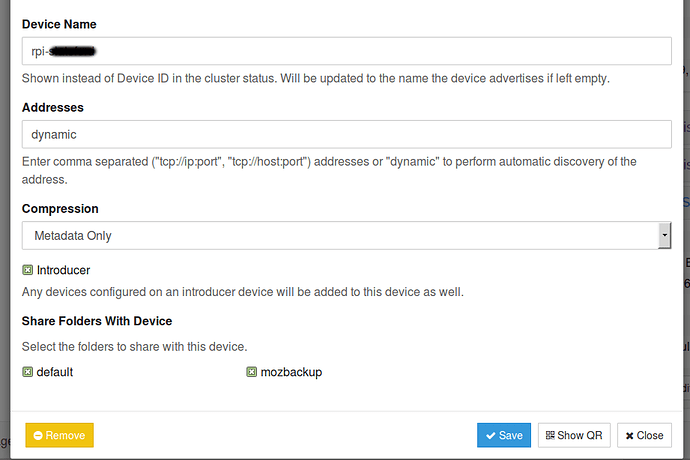 They seem to connect successfully, I can provide more information if you tell me exactly what would be useful.

Do you have rate limiting enabled by any chance? It seems that one of the devices pretty much can’t talk to the other one, but that’s due to some network/OS problem, not syncthing.

Well, as far as I can tell I don’t think so. Here’s a screenshot of my settings: 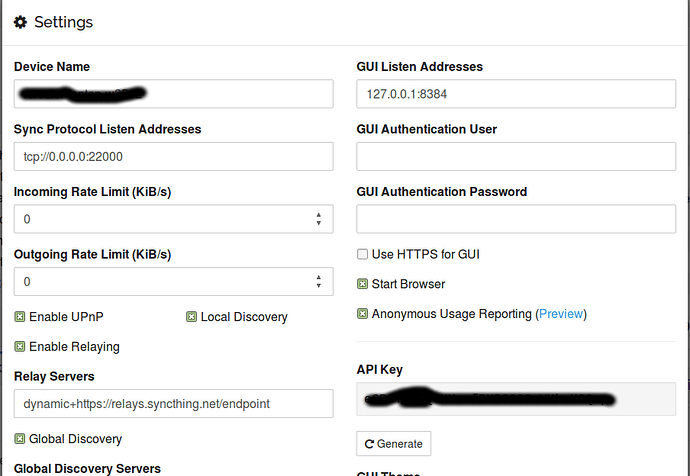 It’s odd that a machine with an identical OS can connect fine, and I see the same issue both inside and outside my network though.

I have the same problem - I guess.

Node A is my phone (Android).

Node B is a laptop running Debian.

I use syncthing to have my photos on all these nodes. Sync between A and B works okay but when I start the nuc the laptop shows 75%(phone), nuc shows 50%(phone) and my phone shows 100% for the folder.

Is either of the sides memory or cpu starved?

In my case, I don’t think so since syncing works fine between the two laptops, and between one of the laptops and the pi.

I’d use iperf or something to benchmark the network performance, so see what’s up.

And check CPU usage using top on the Pi. I’ve seen reports of slow devices churning “something” for minutes after connected before starting any activity…

So I checked CPU usage using top on the pi while the syncing is stuck at 0%. There’s no significant usage. I’ve never used iperf (don’t know anything about it), so I’ll be a bit longer before I can return with any info based on this.

Well, I discovered the problem in my case. I hadn’t added the laptop which wouldn’t sync as a device in the folders on the pi. Duh.

Sorry for the noise.