I have computer A and B, and 9 folders to sync. Computer A has all 9 folders full. Computer B had it empty. I have copied 7 folders to B with exact copies (or almost), and I have left 2 folders empty for full sync. I have installed Syncthing in both computers. In both computers I have added the same folders and click the “share with the other computer”.

And then I have put them both online (Computer A is at work, it needs a VPN to see computer A).

What I was expecting -> Computer A shows “up to date” for 7 folders (with perhaps few files for syncing), and 2 folders for full syncronization

What I have seen -> Only 1 folder correctly as “up to date”, 6 folders that should be “up to date” or like 95% up to date, they have started syncing from 0%, and one of the folders that was empty says “up to date”, with 0 items in the global and local state (the local is not empty). This is what computer A says. Computer B says all folders as “up to date”, even though it shows “syncing” in the other computer.

So, what is wrong here? *A Rescan ALL makes no difference

EDIT: For instance, look at the capture. The local says I only have 88 items, when it is not true, the local has almost the same as the global. How can I fix it? And what i syncing then?? 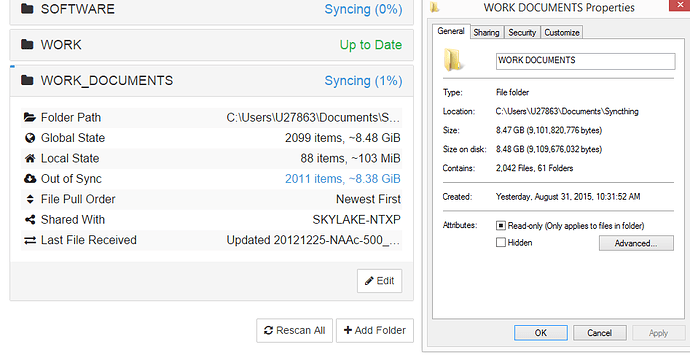 The fact that you copied the files across does not mean that they are the same. Modification timestamps, permissions might be different requiring a sync of the metadata.

Also, if some folders still show 0 on the global state and up to date probably means that it hasn’t yet exchanged indexes for it. The fact that it started syncing other folders also means that it’s now probably saturating the link and that it might take a while for the indexes to arrive.

The fact that local state is 88 is a bit strange as it should rescan the folder before starting to download stuff, but then I can’t see the full path of the folder in question to ensure its the same folder as shown properies off. You can see what it’s syncing by clicking on the out of sync link.

2- So what I’ve had is a lack of patience. Indeed, I was on a very slow connection and that’s why (I guess) it didn’t update. After I’ve realized I didn’t install the correct driver for the usb-wifi, once the speed has been ok I can see that everything seems to have been synced and that the sizes agree with what they should be.

3- It was strange, now it marks the correct number. It seems that if the wifi connection is saturated it somehow affects the rest of processes, even if they appear to be non-related to wifi traffic.

Thanks a lot for the fast answering!