Syncing (95%, 0 B) after removing ignore patterns

Here is the case : the original folder topology used to be a full quadrangular bidir sync, i.e. each device shared the folder fully with the 3 others. No ignores there nowhere, but cosmetics to prevent sync of any case *thumb*.db,*.ini,and *.lnk and allow them to be deleted when needed.

In this times I shared a music album with friends with e.g. song05.ogg & song09.ogg. IIRC, these files were still in the shared folder when I decided to change to topology this way: 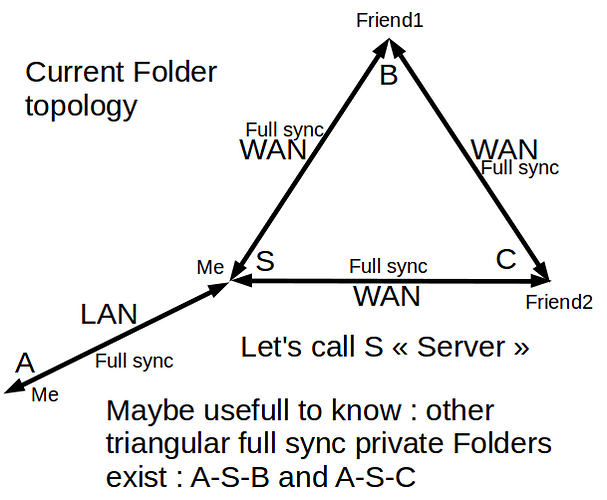 Folder%20Topology610×502 45.2 KB
I decided this because of A has a too small SSD to store things in the folder that can temporarily be huge, and I can Pause the folder in A (or use ignore patterns), still fully syncing Folder in S with friends.

Later, the files were deleted somewhere and I met the “95% 0B” display displayed for devices B or C in S’s GUI (and I lived with, more easily that it only appears when Folder is not empty - BTW reported missing remote files are completely unrelated to the ones in the Folder). I never met this for A in S’s GUI (until today - see case below), and A’s GUI always told and still tells devices “Up to date” for all S, B and C, unless there is real syncing running.

More recently I shared the episodes files of a TV series with my friends, and as I usually do in such a case I ignored a pattern, say Manix* in A (for Manix01.avi, Manix02.avi and so on). When each friend gets a given file, I deleted it in the server so that each of them can retrieve it in one’s “.stversion” 30 days trash when they have free time, until they all have get all files and I remove the remaining ones in the Folder on S… and then remove the ignore pattern in A to recover the usual full sync in A with the Folder.

So far… today 3 files remained in the folder and I can’t delete them as they are still needed by one of the friends… and I thought “it’s time to dig this 95% 0B issue, let’s pick the phone and call B to temporarily re-enable the A-B link to see if the issue disappears, but before I call him, let’s sync S against A removing the Manix* pattern”… but instead of doing what I thought, I did it a different way so that each file is sync’ed at a time: I replaced the Manix* pattern, first with

until Manix02.avi was finished in A, then

until Manix05.avi finishes, then I removed this last line when sync Manix09.avi was done. A shows S “Up to date”… and S shows A Syncing 95% 0B for files…Song05.ogg and Song09.ogg (Mod device B)

Do you know what? I didn’t yet called the friend, just to let you know.

Encountered same issue in situations where initially created a folder, then later started ignoring some files (desktop.ini, ect) and weeks/ months later stopped ignoring any files which is where this issue occurred and became visible.

Kept it simple and just recreated the shared folder to resolve.

Yes, I just found “touching”* these files (and their subdirs if needed), rescan to quickly sync resolves the issue. Just need then to delete these fake files and rescan. Last rescan is not required as it will soon happen anyway.