I am using a setup with two windows computers and an Android device. After all files of a share have been successfully and completely synched before, I just realized that some files get synched (looking at the out-of-synch display) that did not change. Did anybody expect something similar?

Well you have to sync them to get them across, unless I am misunderstanding the question

I edited my question, hopefully it is clearer now. All instances have been in synch before. Together with documents, I actually changed, other documents, that did not change are also shown to be out of sync.

Well if they are out of sync and don’t get in sync they are probably failing to sync. It can happen for example if the files are locked by the editor.

You have to folders in synch, editing some files, restart ST. Now edited files are shown out of synch, but also un-changed files.

Are they failing to sync?

If it says the files are out of sync, they are probably different and out of sync. As to who modifies them, we cannot answer that.

Not failing. So below an except from OOS listing. SP2 is the android device.

The file did not change (at least, what I know).

I get deletions the same way - for unchanged and not deleted files - this worries me even more.

Think it comes from the Android client.

Modified can mean metadata changes, such as mtime changes.

Some way, I can check this in Windows? I checked creation, modification and access time and all were way in the past, long before I setup ST.

Meanwhile I am pretty sure this is a problem with the Android client. So far it seems, that files get removed for no obvious reason and later are added as modified. We are now exchanging messages for about two hours and this behaviour resulted in roghly 3 GB of deleted files (and traffic) during that time!

There were issues with Android that manifested as appearing and disappearing files but we wedged a hack that should help it go awat and we haven’t had any complains in a while. I suspect your version of android is somehow more strongly bastardized and doing lstat 10 times is not enough.

So should I give up?

Well of you are capable of building the android app, there are a few things I could suggest testing out, otherwise it’s very cumbersome to debug when developers do not have access to the device in question.

Thank you for your assistance.

I am afraid, I currently do not have the time getting into this.

I guess my problem is related. I have just started to work with syncthing.

I have never touched files in both computers, just waiting till they are synchronized. I expect that files from Sync in computer 1 are copied to Sync in computer 2, and folder photos comes the opposite direction.

However, in computer 1 (as well as computer 2) both folders are outdated even after 2 days and computer 1 is downloading some files from the Sync folder that was empty initially in computer 2.

I do not understand why is it so.

PS: inotify is installed on both computer, probably it is the reason?

You probably have something misconfigured. Folder ids do not match, or the folders are not shared with the other device or the devices aren’t even connected. You should also try a manual rescan, as things like network filesystems do not support inotify.

Folder ids do not match, or the folders are not shared with the other device or the devices aren’t even connected.

Actually the files are passed at least some of them, so I think that the ids and sharing are fine, aren’t it? Folder Sync was empty on 2 computer but now it is not and folder Photos is not empty on both computers now. I also do not use network folders. It looks like some files are detected as “modified” and transmitted another time, while no actual modification is done. 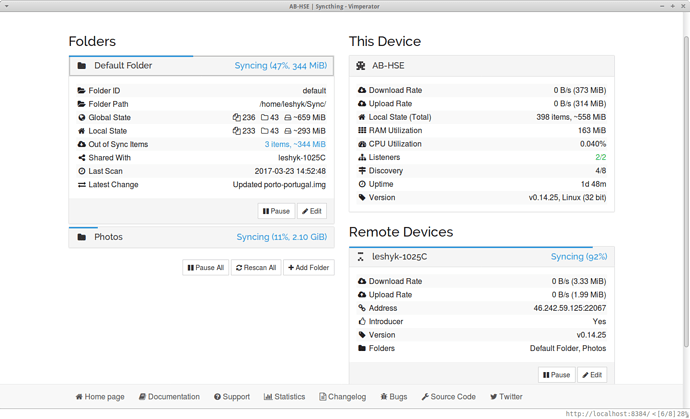 This is computer 1. The Photos was empty initially, and the Sync was not empty on this computer. On computer 2 it was opposite. I do not have access now to computer 2. If necessary can add the screenshot later.