Hi there, I recently set up a Synology NAS with the intent of using it as the central hub for all my media files, as well as a sync point between my desktop and laptop. Ideally, I want to use Syncthing through the NAS to sync my CaptureOne catalog, writing, etc., between all three points.

I connected the two computers, added the eBooks folder on my NAS, and shared it to my desktop, which I matched to the filepath of the same eBooks folder on my desktop. The folder scan went okay on both ends, but it’s stuck at 0% Syncing under Remote Devices, and listed at 18 GiB (which is the size of the whole folder, obviously shouldn’t need to sync that amount). I thought maybe if I left it alone a while it’d sync, but no such luck so far.

As a test, I connected my desktop and laptop directly together, and was able to sync a test folder just fine. Are there issues between platforms (Linux ARM to 64-bit Windows)? Or did I miss a step somewhere?

Adding a few screenshots of the windows on both the desktop (called “methode”) and NAS (called “snowdrop”) side. Let me know if anyone’s run into a similar issue, or what I can do to fix it. 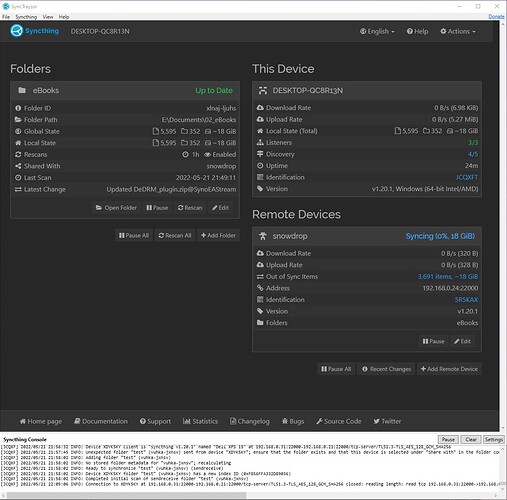 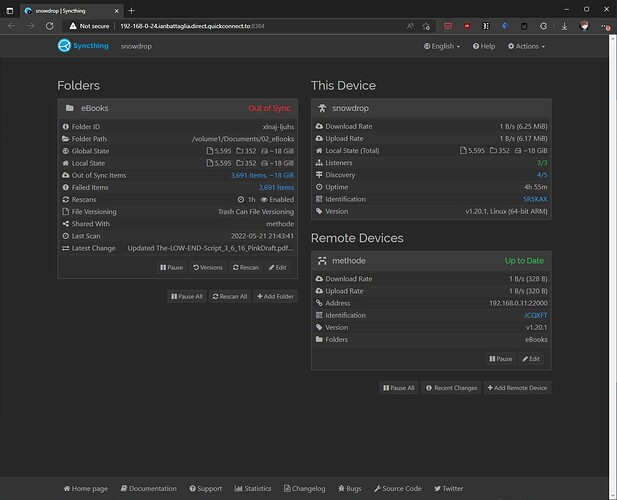 Click on the failed items on the NAS side GUI to see what the problem is. At a guess, it will be a lack of permissions.

Whoops, that seems to have fixed it. I had given read and write permissions to sc-syncthing in the parent folder and down, so I thought that would be enough based on the successful scan, but I had to tick the “Ignore Permissions” box to get things going. Sorry about that, but thanks for the help!