I use node A (OSX 10.9.5, harddisk) and node b (Ubuntu 14.04 TLS, ssd). Last Sunday I installed Syncthing on both nodes. The default dir is working fine. No problems here. But for every other dir syncthing is “working”, but I do not see any effect of synchronization-effort. Let me explain:

My conclusion is that although Syncthings-gui says that synchronization has taken place, the process itself is not executed.

What is the problem and how can I solve this?

My first guess is that the directory was created somewhere other than where you expected, for some reason?

Thanks for the reply.

I used a gui for the search on nodeB. The result was that dirA and testfile.odt where not found. In the syncthing gui the defined location is :/home/peter/Documenten . And that is exactly the location where I am looking at with the linux-terminal.

I just checked it again. With no result. Any other suggestions?

Then I don’t know. If it says that path and claims to be up to date, it would be odd indeed for it not to exist.

Thanks for your input. I will try to find a workaround because I really liked Syncthings and the philosophy behind it.

Next step is involving android.

Please post screenshots of folder edit dialog from both sides.

I have prepared the screenshots from both sides but as a new user I am not able to upload files :-(. Is there another way I can send you the files?

You’re no longer a new user. Although even new users are allowed to put one image in a post, if I remember correctly. 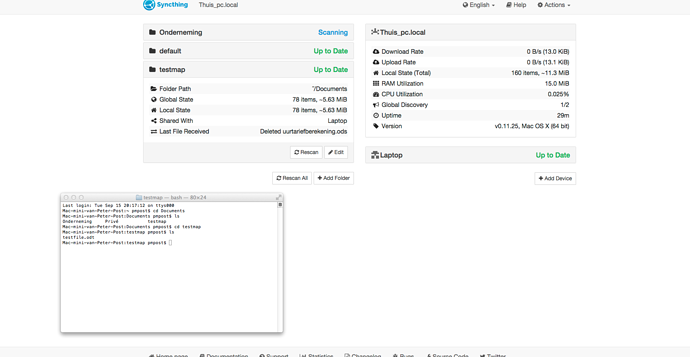 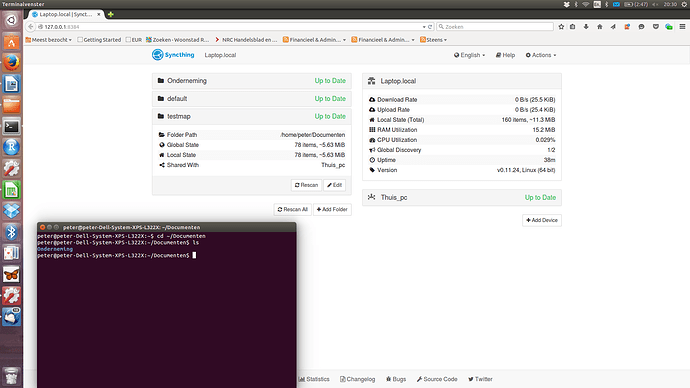 Uhmmm, just one? The rest is coming.

Your ~ character looks wrong, like some sort of accent.

First I posted a screenshot of nodeB (Ubuntu), secondly of nodeA. If needed I can post the info from the syncthingsterminals. Btw I have tested with the dir “testmap” and the file “testfile”

Ok I will try to replace it with the homedirectory words. I let you know.

Also, it’s definitely aware of the files and got them synced, as both sides have 78 files. I think you will find the files synced to one of the following locations:

Ok guys. It works. I have replaced the weird accent and the testmap and testfile are now on nodeB. Thanks for your time and effort.