Suggestions for NOT Messing Up Initial Folder Setup?

This is embarrassing, but every time I have to re-setup Syncthing on either my Android phone or my Windows computer, I mess up the folder I’m syncing. Can anyone give me (or point me) to some suggestions on how NOT to do that any more?

On my computer, the folder I’m syncing is D:\Sync\phonedata. On my Android phone (currently a Pixel 6), it’s the folder Android uses for my phone’s data (/storage/emulated/0). Apparently I’ve given that folder the name “Phone Data” in Syncthing.

Usually, when I set things up on a new install, I end up either duplicating my existing data in the folder above or below phonedata.

Screenshots with specific folder paths, error messages (if any) and the whole synced folder structure on both sides would be useful here.

However, in general it may not be the best idea to sync the whole internal storage of the phone. There are system and app internal paths there that aren’t supposed to be synced or even accessed (without root). Even if you do manage to sync them, most of the data won’t be useful anyway.

Personally, instead of trying to sync the entire internal storage, I’d suggest to simply sync several separate folders that contain data that you actually need.

I’ll include screenshots from the computer since the phone side (besides the path starting with /storage/emulated/0 instead of Sync/phonedata) is the same. No error messages, of course. It’s just that after I accept the “invite” from one device to sync with the other, I’ll check and find I’ve duplicated my data either above or below the correct folder.

For instance, my last foray into this was after re-installing Windows on my computer. The data was still intact, but I had to re-setup Syncthing. On the computer, I had Syncthing display its code abd added the device to the phone by scanning that code. Still from the phone (I think), I shared the folder with the new device (the computer). I probably had to restart Syncthing on both devices a few times, but when the sharing notice came in on the computer, something about the path or name didn’t look right. So, I “corrected” it (I’m sorry, this is from memory). When I noticed that was duplicating my data at the wrong level, I deleted the duplicates and tried again. Wrong again. I’m not sure what I finally did to get it right. I assume I just accepted the sharing notification as is. But, that’s why I’m asking.

And, as you said, after I set this up the first time a few years back, I realized I should have shared specific folders. But, I’m trying to avoid the hassle of redoing all of this (and ending up with another hassle): 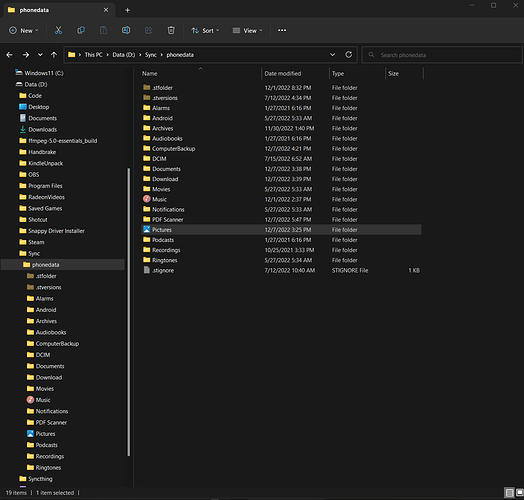 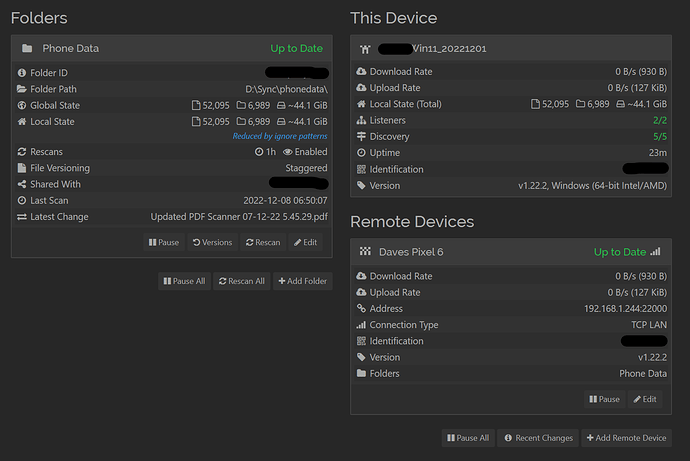 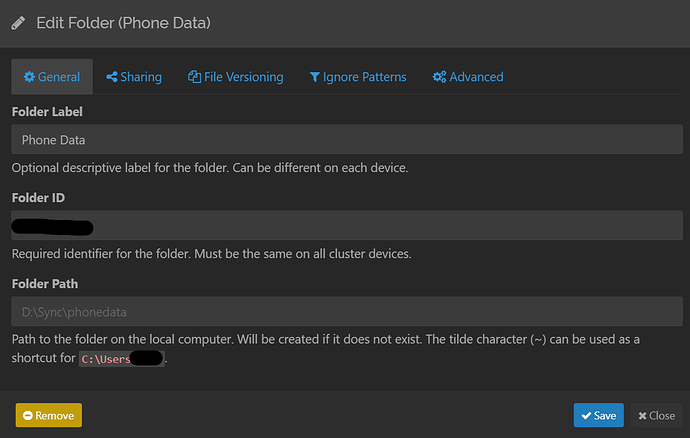 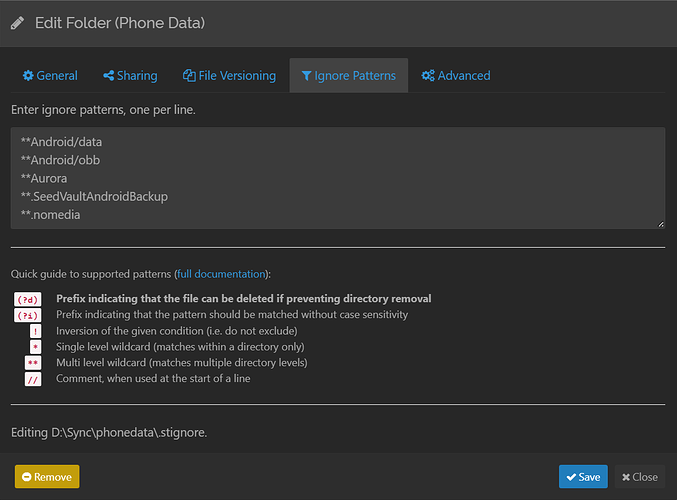 Everything appears correct on the computer’s side. I’d actually be interested in seeing the phone side as well. Screenshots from the phone’s Web GUI (accessible from the left slide-out menu) would be useful.