Hi. I’m getting the strange GUI notice every time a folder is updated on a source host:

The same message appears in the console with WARNING prefix. The source host (the sender) is permitted to send only. The folder (“i4udq-q2yx2”) is shared between that two hosts.

Please, help me to find out what’s going on. 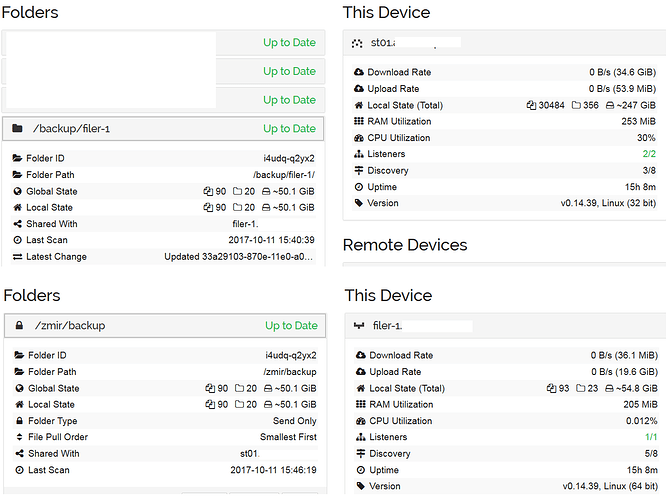 I obfuscated the sensitive parts with “skip” word and removed lines for other folders and devices.

Is this easily reproduced or a one off?

I’m getting this notice every day ('cos I’m backing up Windows every day). I clear it up (by clicking OK button) and get the notice again on the next day:

I mean if you restart syncthing, does that still happen? Is there more than one source of these files, as I suspect if there wasn’t the other device would fail to sync?

I’ve just restarted both syncthing daemons. Will let you know tomorrow. Thank you!

No, there’s only one source of that files.

It appears the issue has gone after restart. Thanks a lot!

I suspect it’s some sort of race condition, but it’s not clear how it happens, and I’d expect sync not to work once you hit this as the message comes from the same location that checks permissions.

Just got that again on Oct 15:

Any ideas how to get that fixed?

I mean, you are the only one experiencing this, so there is definately something wrong with your config.

The code is here:

There is no way the file is getting synced, perhaps the folder/device is paused or something like that?

So, the parent folder (“i4udq-q2yx2”) is definitely in sync.

That file in the output is pretty huge - ~28GB.

What if the new backup (on the source host) has been started and removed the folder “Backup 2017-10-14 223007” before the file sync has been completed? What error message should be in this case?

Looks like I was unclear - I apologies. The source (filer-1) shares the folder /zmir/backup with st01 (/backup/filer-1). The sysstates and underneath subfolders are not shared separately.

Do you have any kind of automation attached to syncthing?

Not sure I understand what you mean by “automation”. The only couple things I have are

What do you mean by stops syncthing via config? How exactly are you stopping it?

I suspect this is the cause of it, as this pauses the folder, at which point it becomes unshared with the device, but there are still requests for it in flight if the data recently changed. Better option would be to kill syncthing at that point.