Remote device syncing while folders are "Up to Date"

Remote device syncing while folders are “Up to Date” How is it possiable? 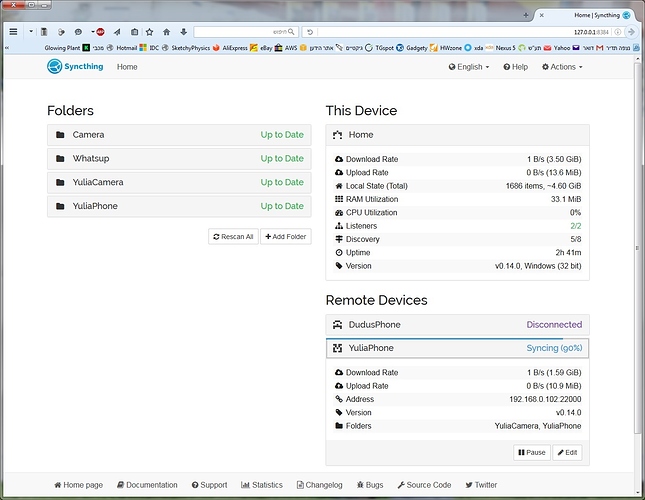 Because the left side is always “you”. And “you” already have everything up to date. But YuliaPhone does not.

If you open the Web UI of YuliaPhone, you will have the opposite info. The device “Home” on the right has “Up to date” and one or more folders on the left are syncing.

you mean “Folders” is the state of “This Device” “Remote Devices” is the status reported by the remote devices?

But Home side is empty - I am backing up my phones … So how could the source be “Syncing”?

This could be because the local machine is creating thumbnails etc. While downloading the files from the phone.

Possibly the 90% is just a GUI caching issue in the browser and ctrl+F5 will fix it.

I mean the left column of the web ui

But Home side is empty - I am backing up my phones … So how could the source be “Syncing”?

So the screenshot show “home”, and you are trying to sync the folders “YuliaPhone” and “YuliaCamara” from device “YuliaPhone” to “home”, right?

What version (Syncthing, Android) is that phone? Are you trying to sync an external SD card?

Yes. LG G3 The other 2 directories are to sync Nexus 5. No external SD card in both phones.

If the remote device is showing its state as up to date it would suggest ignore files are set on the phone.

What is the phone showing?

The phone is showing 89% now It gets worse with time…

Do you use Master folders on your phone? If yes, they are probably Out of Sync. This cannot be seen on the android UI, you have to open the Web GUI.

No Master folders. Because I want to be able to move the backed up files to an unsynced folder on my PC - cousing syncing to delete files on my phones -> effectively cleaning my phones from backed up files.

I deleted the YuliaPhone from remote devices & reenterd it. Still same 80% on both sides.

If you checked all the obvious options (Master folder, permission error and ignores), you should post a log from the Phone (“Open Log” in syncthing-android Settings). Maybe this gives a clue.

Android log has only 2 lines: —Beginning of system ----Begining of main

- I changed the name of the shared folder to a different name then the remote devices name. It took some time but the syncing problem is gone…! (I hope)