"Ouf of Sync Items" not synchronizing

The following bug has appeared since v0.14 or so, and always after I upgrade Syncthing (but not after every upgrade), so I thought I’ll finally post about it. I also think, this is the same problem as these issues:

This has led me to an apt policy of putting the syncthing package on hold (Debian jessie and stretch) and wait for a bit, because the bug seems to disappear after a minor update to the package (I am using https://apt.syncthing.net/ syncthing stable as repository).

So, until yesterday, my three devices were working perfectly using, I think, version 1.1.4. This is the relevant part of the network:

Then, I upgraded Device_A and Device_B to v1.2.0 and, suddenly, I get this (and I’ve seen this problem often and tried all sorts of things, but in the end, waiting for a minor upgrade works best, but it gets annoying): 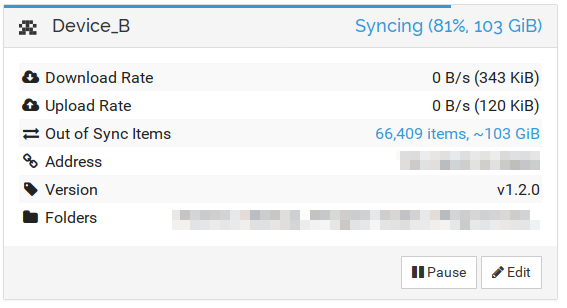 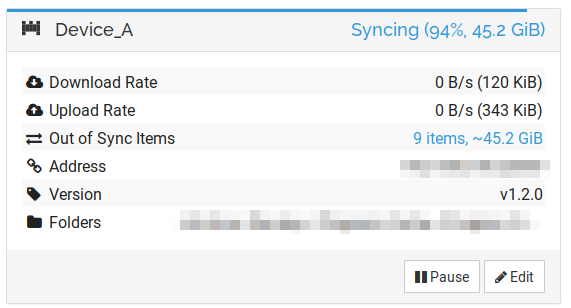 Device_C was still okay then, but today I also upgraded Device_C to 1.2.0 and suddenly: 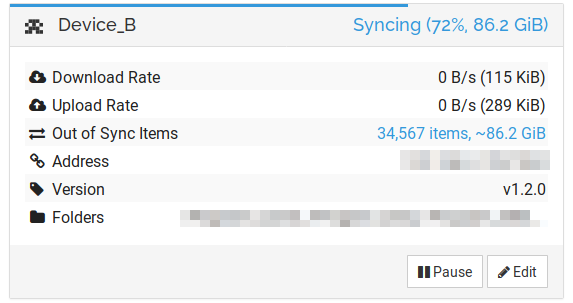 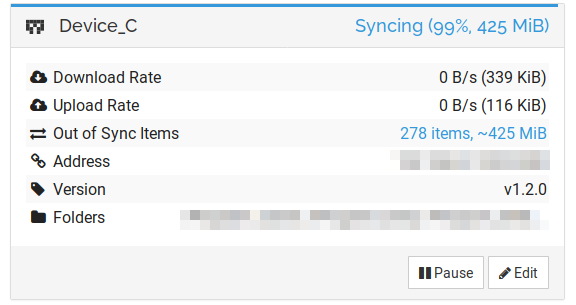 If you examine a few of those “Out of Sync Items” files, they are completely fine: They have the proper permissions (“Ignore permission” is enabled on all shares and devices), the timestamps are the same, the MD5 checksums are the same, etc. If you create a new file in a shared folder, it will synchronize, but not the others.

This happens regularly after a major update, and then after a while, a minor update to the package is released, and the problem goes away.

This sounds very interesting to me!

Are you sure, the Out of Sync Items can not arise, because with every major update the database will be “renewed” and things (initial scannings) will just take so long, until the next minor update coincidental is released at this time?

Just an idea, maybe there is no initial scan after a major upgrade.

I have a similar setups Device_A <-------> Device_B <-------> Device_C (Win+Mac+Linux) and did not see that static behaviour like you describe for such a long time. Sure, if 3 devices are scanning their folders, until scanning is done, I see a lot of Out of Sync Items as in your screenshots, but they vanish after a day or so. (Depends on the Foldersizes)

You are looking at the wrong thing.

I’m afraid you’re wrong. I used tcpdump to monitor the traffic between the devices and realized almost nothing is exchanged. Then I saw, that:

when in fact Device_B is listening on default 22000. If I restart Syncthing, the ports will change to something else, but not 22000.

They are both listening on default port 22000. Any ideas what is going on here?

Also, all three devices have the addresses of the other devices hardcoded as tcp4://<ip_address>:22000. Usually, when the port ends up to be a different one, Syncthing displays this as “discovered”, as opposed to “configured”, but this isn’t happening here.

Yeah, that’s what I said. It’s about what comes after that: The question is, why — given that the address and port is hardcoded – does it

How do you know it’s trying to connect to that port, oppose to being given that port by the kernel when dialing?

You have to understand that TCP requires allocating a port on both sides, and tue source port you are connecting from is usually random.

Upgrades mean a complete index resend. Your screenshot shows the devices “syncing” which means they are processing this index resend. If no changes have happened, no changes are transferred either. This is expected.