"No such file" on receive-only side

I have an issue currently with a folder that has a send-only side and a receive-only side. A folder was removed quite a few weeks ago on the send-only computer, but everything has been paused due to other issues that locked the entire Syncthing (external issues with networking).

After solving the external issues I tried to resume the folders that had been paused and most of it works fine, but I have 4 files that become “failed” on the receiver-side. The reason is “No such file”, which is perfectly fine as the file should not exist, and does not exist on the sender-side. It’s just bothering me that the files are not removed from the receive-only side but rather stays there as ~syncthing.xxxx.tmp files, and if i try to remove them manually they just reappear. 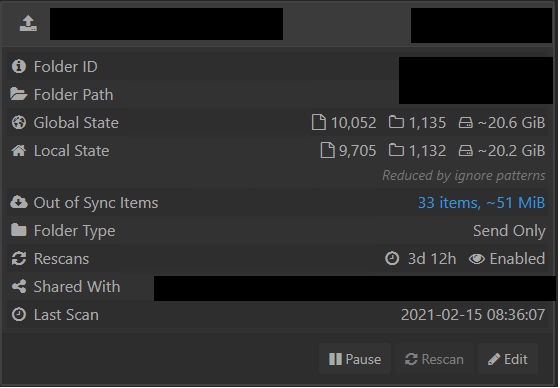 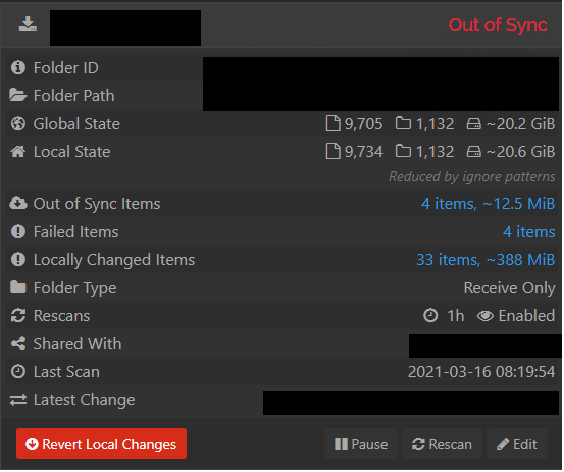 Any hints on what can be done to solve this issue? The issue is present on all the devices (30-ish) that share this folder from the sender-side so it’s not a “one-off” on this specific device.

I’m confused as well. You’ve for some reason redacted the state of the sending folder. It should presumably be “out of sync” since there are out of sync items, but there should be an “override” button and there is not. Is it scanning? Why does it have out of sync items if the other side is receive only? Are there more peers in other modes? Did you change the mode of the other side at some point? Anyway, you should sort out this side first. And post better screenshots so we don’t get more questions than answers.

It’s also usually not great to combine send-only with receive-only. You get two sides where you need to revert and override. Instead combine either with a regular send-receive folder for a simpler setup that is easier to figure out.

Yeah sorry about the redaction of the state, but I wrote below the image as I realised that I had redacted a bit too much:

What would you recommend if the sending side should be able to override changes on all receiving ends? Send-Receive on sending side and receive-only on receiving side or vice versa?

During the night, the folder on the sending side has gone over to Out of Sync state and shows the “Override changes” 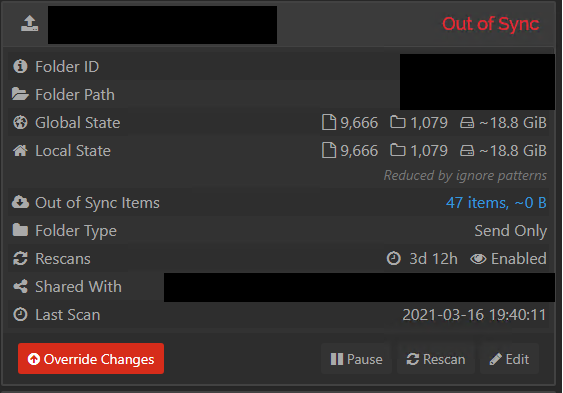 Seems however like everything has solved itself now, the receive-only sides seems to have removed the files that were removed from the send-only side. I don’t understand how or why, but it looks good now.