My thoughts for a GUI 1.0 | looking for a frontend developer :)

Looks nice, to me, defintely better than the current.

Maybe reusing the node specific icons from the current ui in the “Share with” column and device box would be better.

Maybe reusing the node specific icons from the current ui in the “Share with” column and device box would be better.

thanks! I know from work that recognising thinks works much better with colors than with “forms”. By using colors we could color the corner of the navbar as the devices color is chosen. Honestly I dont like the color-boxes in the “shared with” column too.

Just to make sure that previous work isn’t overlooked:

Hey guys, I have been working on a new interface for Syncthing lately and wanted to share it with you guys before proceeding further. The goal with it is to make it easier for average users to use the app, by simplifying the interface and making it easy to understand what is happening at any given moment, without needing special knowledge or abilities. I wanted the interface to feel familiar by using recognizable design patterns. The biggest change is that folders now look more like people …

Fwiw, in current master (v0.11.10 when it’s released), files can be dropped in $config_dir/gui (i.e. ~/.config/syncting/gui on Linux etc) to override the compiled in GUI on the fly, without restarting or setting environment variables.

Is there anybody who would develop this GUI (with me)? I could do any needed graphical-work - but developing

What is the meaning of the red pause button? If red means the folder is paused maybe it should display a play sign instead of pause.

Personally I would find such dual-meaning confusing

Are you working and updating this design: https://projects.invisionapp.com/share/AB2A6DYZN#/screens out of this issue?

nope… it could be a alternative UI or in the end some idea. I think the mockups of Brennan are really nice but imho too flat or plain. (dont know the right words)

and there are some points I would not do like in these mockups - important features are missing.

I would be interested to develop this. Just figured out how to edit the GUI.

My goal is to use this at work where we do projects in teams. Lots of folders/devices. The plan is to first hide useless information and make better use of screen estate. Expect something more like BTS2.

what is/are the useless information for you?

Let me tell you what I think is useful: 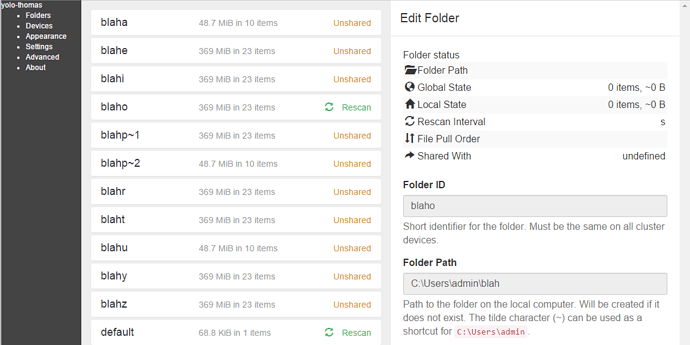 I personally would like to be able to group the devices and folders. I’m starting to get a lot of both and it would be nice if I could organize them.

difficult with this layout

But I’ll keep it in mind

In my mind, this 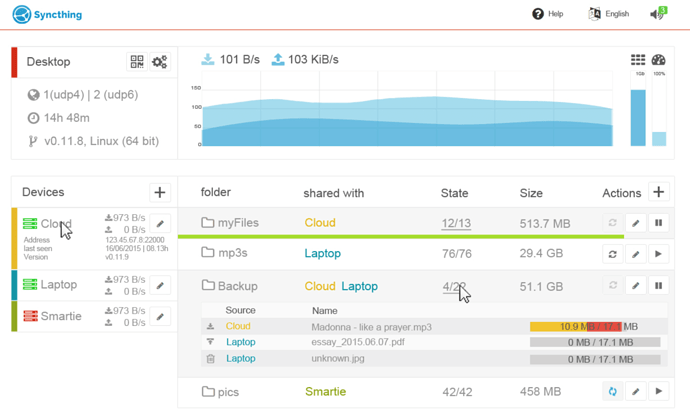 is rather more cluttered than the current 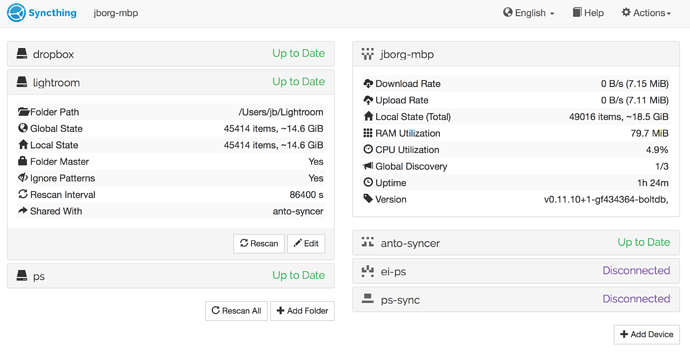 with perhaps too many different colors and bars and too small text. The previous suggestion

is also colorful but doesn’t attempt to cram as much information into a single screen (something the current UI also suffers from btw).

As an aside, I would suggest not including too many elements for features that don’t exist - if someone actually tries to implement this UI, that will need to be removed or wait for the features in question to exist…

you’re right - its not yet flat at all

but within the previous suggestion some imho important things were not layouted or are missing:

once all these infos will be layouted, it will not be as clear as it is now I guess…

but these “missing links” were the reason to layout another gui. honestly I need to get it flat - but first of all, I always worry about the features and then about the final layout.

maybe “truth lies in the middle” as usual

and it’s probably not the final version

I’ll make it flat in the next versions