Hi! First of all, thanks for making Syncthing! I have and am currently opting out of commercial solutions for syncing my data, and have tested Syncthing for a day and it looks to work very good to me!

I was wondering, if I would like to make a simple GUI for Syncthing, do I need to speak to a go-language to a go-library, or could I use my preferred environment - Gambas (http://gambas.sf.net) and build a GUI on top of an existing CLI program?

I made a quick and dirty “GUI” with a Webkit component that opens ‘localhost:8080’ - which kind of works, but It would be nice with tray notifications when files are added or deleted.

I’m wondering about this as well. I’m aware of sync icon thing, but is anyone building actual non-web-based GUI for Syncthing?

I already thought about making one, but I don’t want to duplicate anyone’s effort.

Ok, this is my idea of how could non-web GUI for syncthing look like.

It’s hacked together with python, glade and GTK, but if combined with sync icon, it could give experience similar to Dropbox or SyncthingTray on Windows.

I didn’t found anything similar, so I plan to connect it to event interface and make it somehow usable, if there will be nothing better to do later

Sorry for the late reply!

Looks good! You even made it to WebUpd8

I’d rather have tabs, and more desktop-like components instead of replicating the webui (which is deliberately designed as it is).

For example, have a proper menubar or the chrome-like-cogwheel on a corner for settings, and try to use the OS’s look & feel, rather than dragging the webui’s one.

Well, that header with button menu is taken directly from Gnome design guidelines, but cogwheel instead of “edit” sounds like a good idea. And webui imitating boxes are there mainly because I couldn’t find any standard GTK element that would allow me to show status of node/repo in some sane way, so I’m open for suggestions

I’d rather use something more generic than something specifically oriented towards gnome. Their guidelines look a lot like gnome apps, but extremely foreign on anything else (I can’t say I’ve come across anything with that L&F).

There is this “simplified” UI used on Ubuntu, as HeaderBar doesn’t work properly there. I could add some switch or setting to enable it on normal distro, but that’s as generic as GTK3 can get… 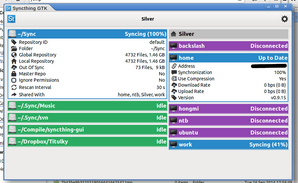 Having some issues on dark gtk themes: