Folder surprisingly shows zero sizes instead of the real values 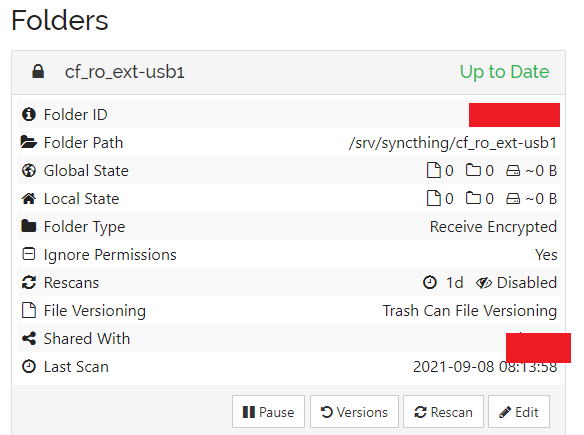 My files are all there correctly.

Weird, because I fully had everything connected and in sync before the upgrade a few minutes ago. It seems the state comes back when the devices see each other again first time after the upgrade.

device B after device A had connection to it:

We maybe should show “unknown state” instead of “0” ?

We do, when it’s unknown. I’m not sure what is happening in your screenshot.

I started out with the two nodes A and B, each Syncthing v1.18.1. They have an on-demand connection via VPN and were disconnected.

I established the VPN connection between node A and B and waited for the “100% in sync state” on both nodes. At this time, local+global state were non-zero and the same on both web UIs. I disconnected the VPN.

Then, I upgraded the Syncthing instances on node A and B to v1.18.2. I opened the log via both Web UIs and saw the characteristic line “Detect upgraded from v1.18.1 to v1.18.2” and “Completed scanning folder …”.

When expanding the above mentioned folder on ndoe B (see screenshot), I noticed the local/global state of zero. I SSH’ed into node B and saw all files + bytes were there correctly - so the “Web UI was showing wrong information”.

I reconnected the VPN. Node B initiated connection to node A. The moment, they saw each other again, the local/global state on node B recovered to the expected non-zero state. Node A and B from this point ongoing showed the correct file count etc. again.

I think performing the Syncthing update was my “action” that caused node B’s local/global state to zero (until reconnection).

Btw.: node A is sendOnly. Both nodes did NOT show any revert/override buttons.