I found that there was a workaround to share an android folder on extsdcard as foldermaster even if it is not accessible for writing so I decided to sync my photos folder. But since it is quite big I decided to sync it directly to my NAS storage. There is a folder on the NAS which I use mounted as a logical drive Z:. So I synched the photo folder to a subfolder on the Z: drive. It all went smooth and all the data got synched to the NAS. But now I get the error seen on the screenshot 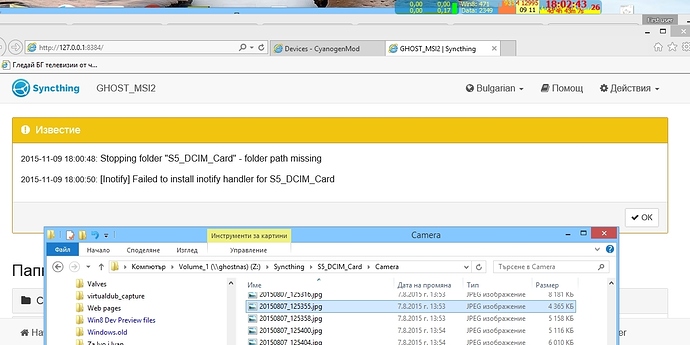 Screen1.jpg1199×600 207 KB
This happens even after I opened Z: in Explorer and it shows just fine. At the same time I cannot access Z: from command prompt. Probably some mounting issue in Windows. I tryed creating another sync folder using non mounted share name “\\ghostnas\Volume_1\Syncthing\S5_DCIM_Card\Camera (0)” and it scans correctly. Should I allways use this? Or any hints how to make the mount work outside Explorer? Without restarting the PC?
AudriusButkevicius (Audrius Butkevicius) November 9, 2015, 11:41pm #2

So its best to ask this question on stackoverflow or your NAS support forum as it seems specific to your setup, and not syncthing. I doubt anyone will be able to help you.