Because we’re listening for potential connections but we might not have any yet which makes the term “Listening Connections” a bit strange.

Accepting or awaiting connections sounds fine, but if you’re looking to replace “listeners” you need a noun and not a verb, in at least some places. I’m not sure an “acceptor” or “awaiter” would be an improvement over listener.

Accepting or awaiting connections sounds fine, but if you’re looking to replace “listeners” you need a noun and not a verb, in at least some places. I’m not sure an “acceptor” or “awaiter” would be an improvement over listener.

I wouldn’t replace it everywhere, just in that one place in the overview. The intent with these suggestions is to write what it does instead of what technical term is used for the mechanism. Therefore I’m leaning toward the verb form / half sentence.

In my ears that sounds like an eavesdropper on the connection. Can’t imagine it to make sense to an uninitiated user.

How about combining the what does it do with the technical terms:

I don’t see the immediate connection from “listening” to “eavesdropping”. In fact this discussion is the first I’ve heard of it in over half a decade of using the terminology. Listening is what you do when someone talks to you, after all.

Any objections to those suggestions from @calmh?

I could easily live with those, although they’re still rather technical. But in some regards the current GUI is rather for technical people, not something like Dropbox with its colorful simplistic icons, hiding all the details what it actually does.

I don’t see the immediate connection from “listening” to “eavesdropping”.

It was about “listener”, which, mentioned next to a connection (which has two ends already), sounds like a third, unrelated entity. But never mind, we don’t need to go deeper on that.

It was about “listener”, which, mentioned next to a connection (which has two ends already), sounds like a third, unrelated entity.

Yeah, I would say that the word “listeners” (with no additional explanation, etc.) paired with a number next to it is the scary part here.

I think a dialog like proposed that shows information about the listeners/discovery, thus making it easy to discover what it actually is, is a good idea.

As for the naming: I believe this is an inherently technical indication and thus very hard to make “easily understandable”. Dropbox has been brought up: I don’t know it, but I guess they simply don’t show this kind of information.
Basically if these elements are indeed “damaging” (I am not convinced, see at the end), I believe the right thing is to hide them. Potentially having a “beginner” and advanced/debug theme, or another dialog, or whatever.
I don’t see any value in making the string longer. The technical term is succinct and easy to discover. The first hit searching syncthing listeners is perfect: 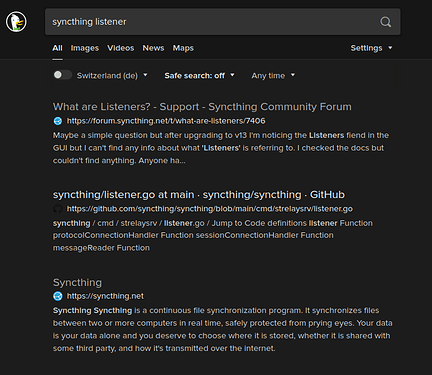 As to “listeners” being scary:
This is not a unknown, scary third party something telling the user that “some things” are listening somehow. It’s the Syncthing control panel telling you about the status of a concept called “listeners”. This is a peer to peer synchronisation tool, it searches, finds and talks to known other trusted devices. That it involves responding to incoming searches/requests/updates/… and that involves something akin to “listening” seems very appropriate to me.
I am not saying a new user will have this kind of detailed (well “detailed”) knowledge, that’s why I think a dialog with further information on how it is listening (and maybe a sentence about why) is a good thing. I just think that the concept of “listening” isn’t unexpected in this context.

Looking at this topic’s headline, the word “listeners” alone is obviously not enough. I confirm from my own experience that I never grasped what that entry means, for years of thinking it’s probably not important. Especially unintuitive is why there is a count next to it. I would expect the Syncthing to be “listening” for connections, not several things.

For that reason I will pursue the slightly longer string proposal, as there have been no vocal objections against it (except maybe “no value in making the string longer”).

So I saw the PR, but I am not convinced the word active adds much here, at which point the change to me looks noop.

Looking at this topic’s headline, the word “listeners” alone is obviously not enough.

Nobody is saying that “Listeners” on it’s own immediately bestows enlightenment on the reader. I am pretty sure neither will “Active Listening Addresses”. That’s my entire point: Not entirely simple concept - not understandable from one, or three, keywords without prior knowledge. I consider the dialog you proposed presenting the listeners and maybe a sentence about what they do/link to docs as a viable means to provide more info to someone wanting to know what it means.