Failsafe transition from “Receive Only” to “Send and Receive”

After that I set up a new synchronization, and the (moved) destination folder was successfully synchronized with the source folder again. So far so good.

Now I plan to change the synchronization type from “Receive Only” to “Send and Receive”.

When doing so, I want to be 100% sure that no files are accidentally deleted from the source folder.

If, for some reason, the destination folder should contain fewer files than the source folder in the meantime, and therefore the switch from “Receive Only” to “Send and Receive” could lead to files being deleted in the source folder, I want to make sure that these files are at least being backed up using File Versioning.

Now I’m only not sure whether I should set up File Versioning on the source PC or on the destination PC for this purpose?

If both should be possible, I’d rather set up File Versioning on the destination PC.

Many thanks for help :o

If you’re worried that files on source PC can be deleted, there’s no point in versioning the files on destination PC.

But all you really need is the “revert local changes” option in destination PC’s interface. It does exactly that: reverts all the changes Syncthing thinks may have been made on that PC and not uploaded to other participants (not uploaded because of read-onlyness), so after you trigger it (and let it sync) it’s sort of guaranteed that this PC, if made read-write, has nothing new to offer to others (neither additions, nor deletions).

That being said, Syncthing is software, and any combination of software, OS, and hardware may have unexpected glitches, so if you want to really be totally sure, take an external drive, backup your data, disconnect it and lock in a vault somewhere in another building.

Thanks very much Evgeny your helpful explanations.

For some reason Syncthing/Synctrayzor is now telling me:

…on the destination PC.

In fact, when checking in Windows Explorer, the destination folder (on the destination PC) seems to suddenly lack hundreds of folders and their contents. Synctrayzor however reports a difference of zero bytes, as can be seen from the screenshot.

I am completely puzzled as to how this could occur, what this means, and what would happen if I pressed the “Revert Local Changes” button on the destination PC. 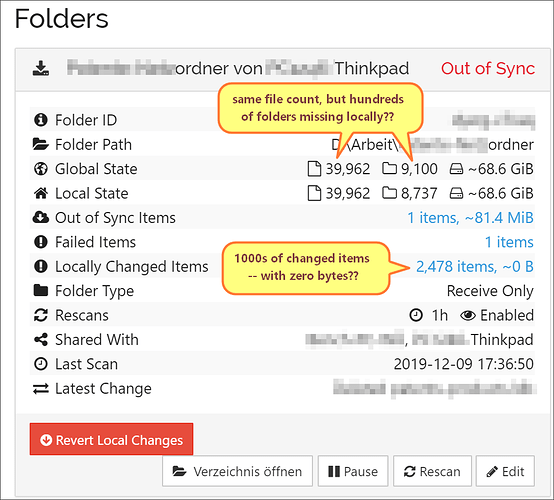 Thanks for any spontaneous ideas what could have happened here :o

I can not fathom what the lacking folders are supposed to be all about, but a lot of changed items with total of 0 B is usually files deleted or permissions changed.

In any case, as soon as you press the “Revert Local Changes” button Syncthing will make local state the same as golobal state, i.e. overwrite all the local changes with remote state.

Now I just re-booted the destination PC, and Syncthing/Synctrayzor simply overwrote the PDF file that I have been working on all day, with the old version from the source PC.

Is this what is supposed to happen, when the destination folder is set to “Receive only”? No “Local Additions” or “To be Resolved” conflicts?

Edit – actually, the file is still there with an ending like

However, there is no respective “Local Addition” shown in Syncthing/Synctrayzor…

Man how I wished I understood syncing.

If I go for “Revert Local Changes”, will this delete files like:

…in my synced destination folder?

Even more unbelievable issues. That file:

…show as modified last by the source PC in the “Conflict Resolver”.

However, that file has not been touched by the source PC, but edited the entire day on the destination PC only. 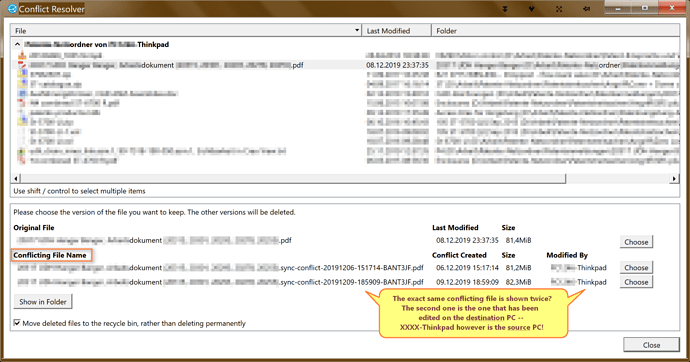 After backing up today’s files, I shall press that RED BUTTON now

Keep your fingers crossed for me.

Interestingly, it only took 1 second after pressing that button to go from here: 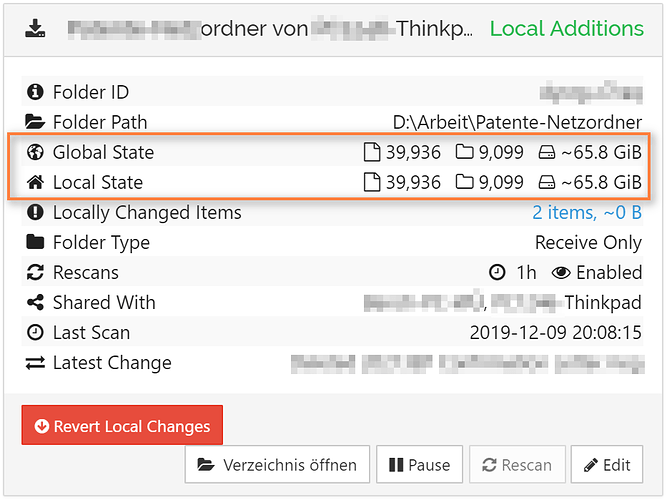 I may be wrong here but the whole story doesn’t seem right to me here.

The only thing that seemed to work as intended was you not getting any notification of conflicts - you’re not supposed to, they just appear as ‘.sync-conflict.whatever’ files.

However, they’re not supposed to appear if only one side is modifying the file. If the side modifying the file is receive-only, this side would have the new version and the other side would have original version. And as soon as you press the red button in that case, the modified version should be gone completely, replaced by what the other side has (the original version).

Are you sure the other side (you call it the ‘source PC’, I believe) doesn’t silently modify the files in question (via some background indexer/file organizer/annotation software/whatever)?

Thanks Evgeny, I will keep trying to understand this all…

I have now changed the folder on the destination PC to “Send and Receive”, whereas on the source PC the folder is still set to “Receive Only”.

What happened now is that on the destination PC, the folder is reported as “Up To Date”, while on the source PC it is shown as “Not Synchronized” with 2 changed items…

I think I need to sleep over that :o

All right, I lost track of your situation completely. You had computers A and B (let me use these letters because I think I’m constantly misunderstanding you “source” and “destination” terminology). In the original post you said you had A successfully synchronized with B under the condition of A being Receive-Only, and wanted to make A Send-Receive. That made sense.

Now you’re saying you’ve made A Send-Receive and B stays Receive-Only? Are you saying that initially both A and B were Receive-Only? How were you even able to sync them?

will answer asap in more detail.

For the moment only the information that, after changing to “Send and Receive” on both A and B, things seem to go well for the time being.

I’m only still not sure whether this has happened:

Hi Forum, rather carelessly, I changed the name of my synchronization target folder “D:\MyFolderName” on my PC ‘B’ today. The source folder is a network drive which is displayed on my laptop ‘A’ with a network drive letter like this: “Z:\MyFolderName”. Synchronization is set up both ways (“Send and Receive”). After a few minutes I stopped the synchronization. However, Synctrayzor already had thrown lots of tray icon messages on PC ‘B’ like “couldn’t delete folder XYZ” (or something similar). …

…because on PC A (sorry, used “A” for the source PC over there), it seems that there HAS been some sort of mass deletion of files :o