I just configured syncthing to sync two folders between two different machines. I added both machines IDs correctly (I hope…) and the machines found each other. However, in the syncthing webclient I have two entries for each folder, in a total of four entries. Is that the normal behavior or I just misconfigured something? Because the default folder, which I also allowed to sync, has only one entry in the webclient. Note that at least in one of the machines (I will only see the other in a few hours) that has not implied in the creation of two versions for each of the folders: regarding folder structure everything appears as it should thus far.

Thank you all for your attention.

The folders IDs are different, but is this something that I can change during the first set up? Also, I deleted one of the “duplicates”, just to see what could happen, and the copy left is just saying “Stopped”. Here are the screenshots. 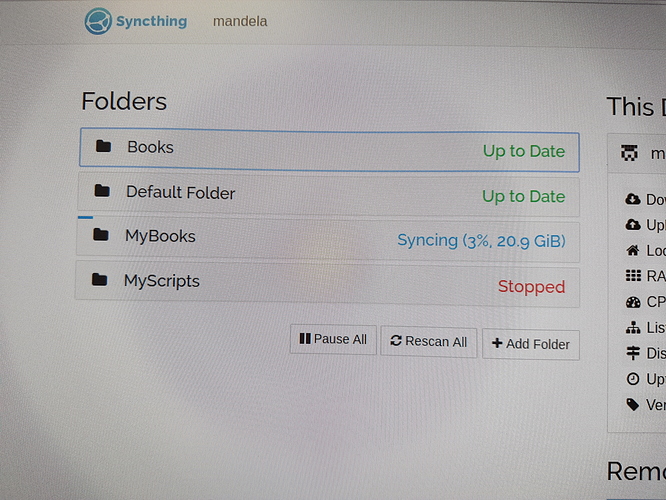 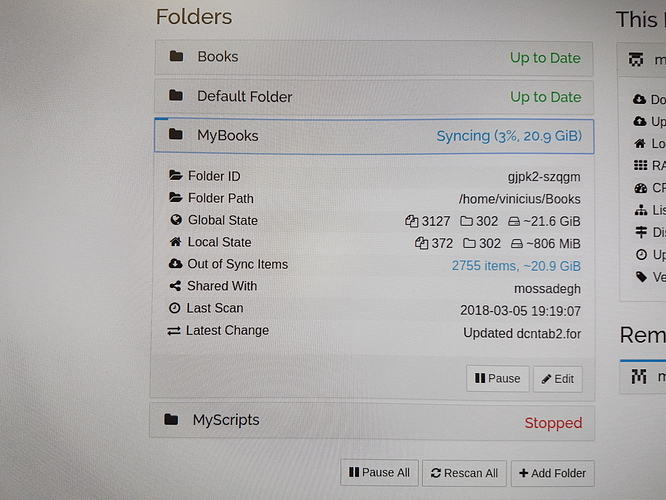 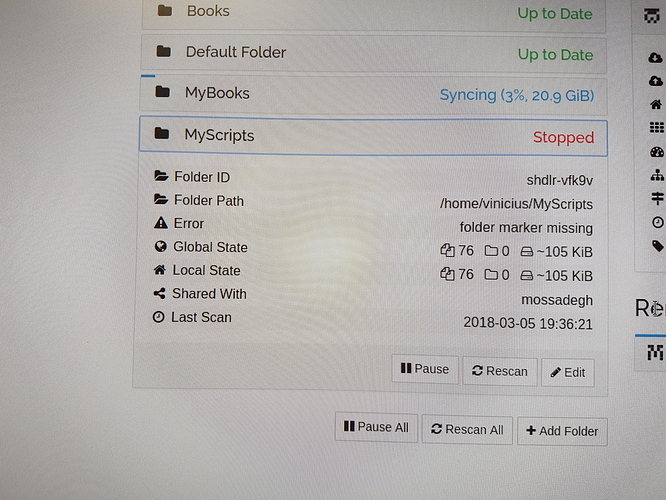 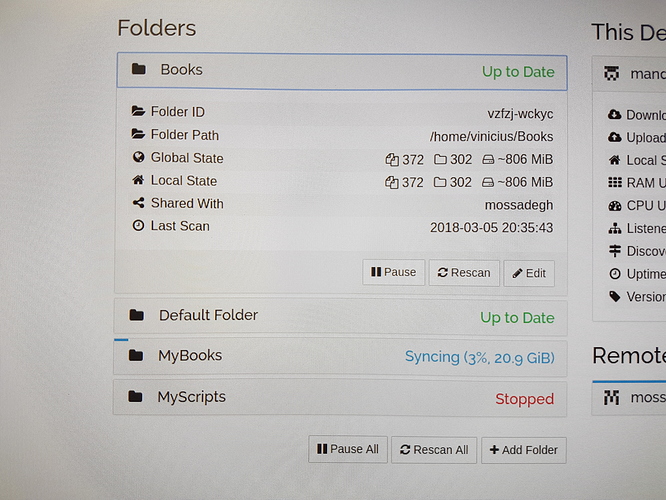 Books and MyBooks have different labels but they have the same path in each local machine.

Well you added 4 folders yourself, syncthing couldn’t be inventive and give it different names.

The label is only used locally to distinguish between shares.

Eventually I decided to delete from the client one of the repeated entries for each folder to be sync in each of the machines. But I guess that screw up things somehow: I just found out that the contents of both folders have been mixed by syncthing. So now I am a little lost. I will just delete everything and try from zero. I can do that since those are relatively small folders and I have an updated backup. Probably tomorrow I will know already if the new setup will work and will let you guys know. Thank you again.

You must have had one of the shares pointing to the wrong directory on a device. That would have caused the contents of the folders to be merged… As a general rule you probably don’t want to have more than one share use a directory unless you have a specific reason to do so.

Thank you again Kluppy for your reply. I still don’t understand all the errors I have made, but I finally understood how to rightfully set up the syncing. First I deleted everything that I have created regarding the folders I wanted to share, including the folders content in both machines. Than I added the folders again at ONLY ONE of the machines, say machine A, and just ask to share each folders with the other machine, say machine B. It took a long time, more than one day, but eventually the client in machine B asked if I would like to share the folders with machine A. This was one of the thing that I have done which were wrong: I have created in each of the clients in both machines A and B both folders, because that is how I thought the syncing would work, which was utterly wrong. Thank you again.