I’ve done the mistake in upgrading my DSM from 6 to 7 without realizing that Syncthing Kastelo is not supported.

I’ve now re-installed Syncthing community version and i can’t figure out how to restore my configuration. Devices and locations haven’t changed , only the OS and Syncthing version.

Old configuration files are in /volume1/syncthing-data/ , where can i copy the contents of this folder to restore my previous configuration/files ?

Wasn’t sure how to edit my previous post but with the help of an ungodly amount of googling , i was able to restore my previous configuration. Topic can be locked.

It might be helpful to others if you shared how you resolved the issue. I’ve actually been thinking about this, myself.

There are several good reasons to develop the Synology package beyond DSM 6. Such an event concerning loyal followers would be one of them.

The default path are:

Andy it was actually /volume1/@appdata/syncthing where the configuration location was stored for the Saphire version.

Is the folder var inside or inside looks similar as follow: 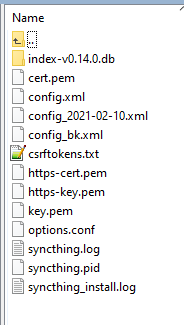 So after i found myself with DSM7 and the new Syncthing i wasn’t sure where the new configuration files were so i had to run htop in ssh(putty) to see where is Syncthing running from, which took me to the folder @appdata. Then i stopped Syncthing , i used chown to change the permissions of the files (to admin) , deleted them and then used WinSCP to browse to the path and paste my old configuration back in there. Then i used SSH to chown them back to how they were in the first place. chown -hR sc-syncthing syncthing.

is correct in DSM 7, what I describe first, is the path in DSM 6.