does my use case fit Syncthing? (and help a stalled sync?)

Hi, I’ve been messing with syncthing for a few days now, and have found a few things work great for me, and a few things don’t. I’m starting to wonder if syncthing fits my use case or not. can you please comment?

use case 1: sync of photos from android devices to an unraid server (primary), which then syncs to a desktop hard drive where it’s faster/easier to manipulate photos that are local. Save, and they sync back to the unraid box and the devices. That seems to be working perfectly.

use case 2: mostly to be used as a backup - sync movies, photos, and tv shows to a second unraid box which runs a second backup plex server. In this case I want a true copy, not an encrypted backup, so that the backup server has a fully functioning plex instance on it as well as the primary server. This use case I keep running into issues. I have a sync stuck at 91% complete with 14,xxx files for 1.2 TB remaining. Both primary and secondary unraids have up to date scans, yet the sync does not continue. primary is set to send only, secondary to recieve only, since I never want to make updates on the secondary server itself. It’s acting as a backup, but I want it to be a “live” backup.

Are you using the newest version of Syncthing on all the devices? I am asking, because from your explanation it sounds like many of the issues that people have had when their Debian/Ubuntu machine used the super-old version of Syncthing from the default repository rather than the updated one.

yeah good question, I had to check! Installed all of it a few days ago, but running in a docker which looks to be kept updated… the two servers are running |v1.13.1, Linux (64-bit Intel/AMD)| - looks like the latest version based the main download page here … ?

and all the androids are on 1.13.0 and windows computers are using SyncTrayzor on 1.13.1 … none of which factor in use case 2 and are working perfectly!

You may want to provide some screenshots and log files from both sides that have those files-stuck-in-sync issues.

Hi, thanks for taking a look. Here’s my primary server. 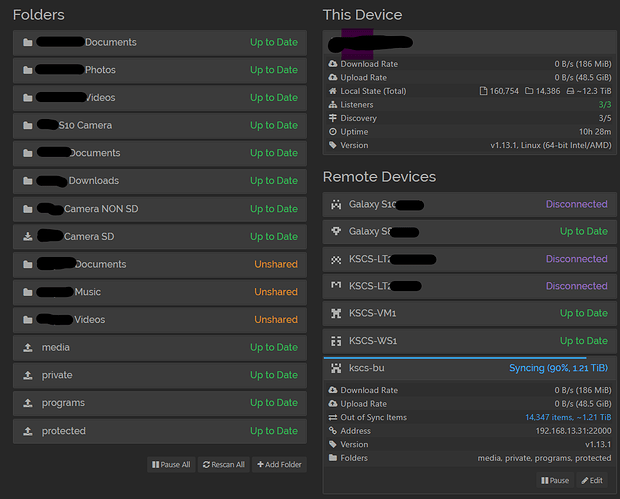 and the backup server:

And the folder that is out of sync: “protected” on primary 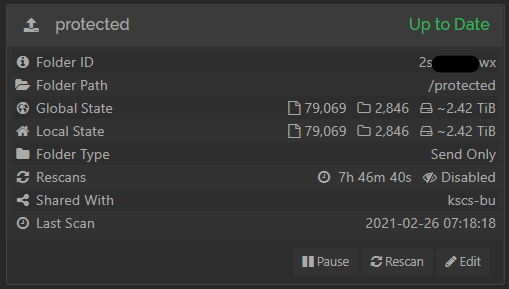 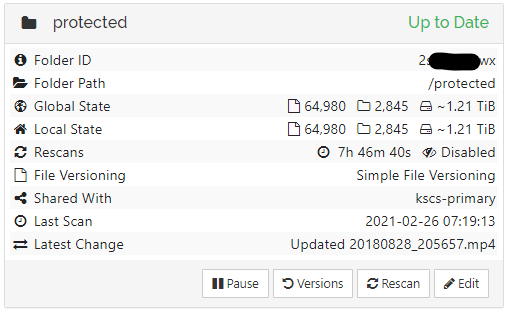 Somehow the primary box knows there is 1.21TB left to sync, and 14,347 items. But none of the folders seem aware there is a discrepancy.

Note, I currently have watch changes turned off on both folders and a long duration between scans. It doesn’t work now, and it didn’t work with watch turned on either. I would prefer them off because I have my backup server set to start at a specified time in the BIOS - I want it to sync, then shut itself off again. I found with watch turned on and short duration between scans the drives would never spin down which is a prerequisite to shutting itself off.

Anyhow - any help or insight you can provide would be greatly appreciated! If my use case 2 isn’t suitable for syncthing I’m Ok with that, I can go back to my daily scheduled syncbackfree running in a windows 10 VM that’s been going for years. Syncthing does fit use case 1 and seems to be awesome for it. This just seemed like a more elegant solution, and one single solution to manage it all…

You mentioned logs - where should I get them from please?

Just saw on the backup box, so many files have the prefix .syncthing. in front of the file names, and a .tmp extension… looks like teh file sizes are all showing as expected, but they are not registering as files I think. did a search in windows explorer for “.syncthing.*.tmp” … results: 14,058 files found. there’s prob a few like this in other folders as well … thoughts??

It does seem that you have tons of files stuck for some reason.

You mentioned logs - where should I get them from please?

You can access them in the Web UI (see Actions → Logs).

I would suggest running Syncthing with the -logfile="default" flag, which will make it rotate between 4 logfiles saved in the Syncthing’s data/home folder.

did a search in windows explorer for “.syncthing.*.tmp” … results: 14,058 files found. there’s prob a few like this in other folders as well … thoughts??

You have mentioned Windows, but the screenshots only show the Linux machines. Could you show the UI on the Windows side too? Also, because Windows is involved, please check whether your antivirus software is not blocking the files in any way.

For diagnosis, the output of the /rest/debug/file for one of the files shown as out-of-sync would help. It takes the same arguments as this endpoint, however you’ll have to enable debugging first (web UI: actions > advanced > gui): GET /rest/db/file — Syncthing v1 documentation
Here’s an example curl command for linux: REST API — Syncthing v1 documentation
And an explanation for powershell on windows: [ How To ] call the REST API from Windows PowerShell

After that I’d try starting Syncthing with the -reset-deltas command line flag on primary.

Appreciate the feedback - been super busy at work so didn’t have a chance to play with it much. Will try and look tonight and see what’s going on. I wonder if it might be related to nesting of sync folders (another thread I’m starting)… thank you

Thank you for your help! It’s finally sorted out and been working as I’d hoped it would for the past couple of days. The documentation is good. And the forum members here super helpful so thank you.

Resolution was due to a few things: failed transfers creating several thousand .syncthing.*.tmp files. Changing the “keep temporaries (hours)” value under the advanced->options menu to 2 and doing a rescan cleared them all out, and then the files started to sync again. I’ve shortened the duration on all my devices from 24 to 6 now across the board.

The nesting of sync folders was also the cause of some issues - resolved in another thread: complex sync structure - bad? - #8 by tiwing … excellent advice and help over there too.

Really appreciate the assistance getting this set up.