This folder is on a windows 10 computer.

The two computers are syncing normally only the files and folders within the exclusion list.

The thing is if I put a new file inside a synced folder then it doesn’t sync back to the root computer.

Initial Computer with all files (Syncthing in 2 ways sync):

I tested this behavior with only two computer then the files are synced 2 ways like they should. But with the combination above in 3 computer sync it’s not working.

Am I missing a thing ?

Thanks for any help

I could see a possible scenario that could (but of course shouldn’t) cause this. (Paging @imsodin on the thinking.)

Device B: sees new file, scans it, announces it to A and C

Device C: ignores the new file, sets the invalid bit, announces to A and B

Device A: gets the announcement of the file from B and C, the one from C has the evil bit set, and somehow ends up as the frontmost file in the global list. Device A does not attempt to pull the file because it is deemed invalid.

Maybe this is order dependent or something on A.

We should make sure that given both valid and invalid variants of a file the valid one always wins. I’m not 100% certain that we do.

It could be an answer as I see Device A seeing a new folder but not syncing it.

That scenario should not be possible: An invalid files should always lose to a valid file with the same version. As file from B announced to A is valid, it should win over the file from C with the same version but invalid bit set.
I checked the code and there is one loophole, but I don’t think it applies to the situation here: When files are in conflict, normal conflict resolution happens (i.e. checking delete flag and mod time, but not invalid), so an invalid file might win over a valid one in that case. I’ll fix that.

The thing is this happens with new files as well as modified files.

Try pausing device C on device B before adding a new file. If it gets synced, C is preventing it like @calm suggests. If it doesn’t get synced, it has another reason.

So I did some tests.

Machine A shares a folder Machine B syncs with exclusion list

So with the exclusion list, Machine is only syncing 16640 folder and files.

I put a new file insde 16640 folder on Machine B and then it doesn’t sync back on Machine A.

Syncthing on Machine B doesn’t even see the new file

Did you try to use the Rescan button on B?

On both sides it doesn’t change anything.

Syncthing on Machine B doesn’t even see the new file

So the problem is locally on just that device. To clarify: Device B has the exact exclusion list you wrote above and you create a file at “16640/newfile” and that does not get scanned (file counter doesn’t increase)? You can enable the scanner debug facility, trigger a scan and check the logs for lines with the name of the file you created.

I need to clarify something that I just tested.

It seems it’s just a regular expression issue because I just tested what follows. 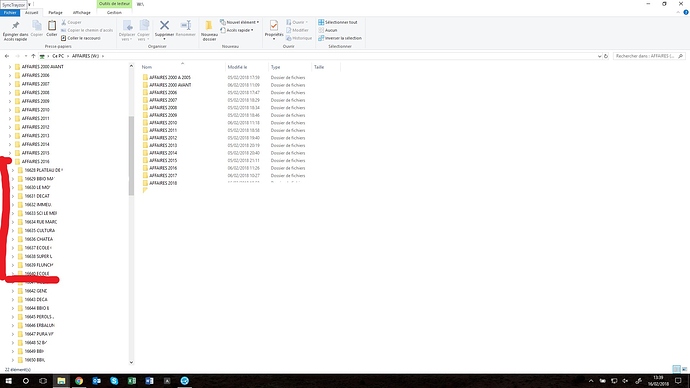 You can see that the folders are like this

So I tested to copy on Device A the 16640 folder at root so now my treeview on Device B is this:

Guess what ? When I put a new file on Device B inside the first 16640 folders then it syncs back normally to Device A.

As you asked @imsodin I enabled the scanner debug and it seems that it’s ignoring folder “AFFAIRES 2016” because of the exclusion list.

But I don’t want all the folders from “AFFAIRES 2016”. I tested like this

* matches “Affairs 2016” and thus excludes it, so its child files are never matched. You need to specify ignores for every level e.g. like this:

ok so it’s working but it’s kind of tricky because when you see it syncing one way you think it should sync the other way too but in fact it’s not. 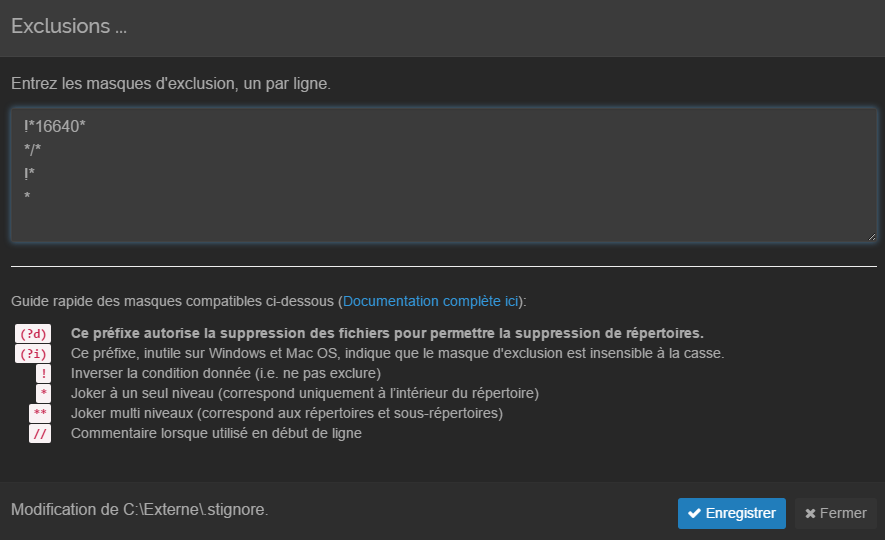 In that exclusion list * has no effect because !* is the opposite of *. I assume what you want to do is:

The leading / anchors the pattern to the folder root.

Sorry, you lost me there.

I can confirm that both your exclusion list and mine are producing the same effect.

Sorry, you lost me there.

If I remove !/*/16640* from the exclusion list on Device B then it won’t sync again this folder but the files will remain on Device B even if it’s now exclude from syncing. What I wanted to know was if it was the expected behavior or if syncthing should delete the files on Device B (which is in fact what I want to achieve)

This is in exclusions list as an exclusion from exclusions, so it is an inclusion. Removing an inclusion, as far as it is not re-introduced lower in the list turns it (as included in final general * exclusion) to be excluded. Then ST just ignores matching items. Beside of this we hope

1a) I work on files and let sync

In you case your 1640 thing will match the general exclusion, so will be ignored. ST won’t sync local (nor remote) 1640 so you’ll need to manually delete it locally if you don’t need it. Deletion won’t be sync’d

That’s what I’ve been doing as well

If I remove !//16640 from the exclusion list on Device B …if syncthing should delete the files on Device B (which is in fact what I want to achieve)

Strange wording then. I read you want to achieve ST to delete the files once ignored !

That’s right. I wanted ST to delete the ignored files that were previously synced. That’s impossible so I do it manually