Right out of the gate, let me clarify that I think Syncthing is doing what it should. I’m just a little concerned about what the GUI is saying. Essentially, my folders are synced, but the GUI says it still needs to sync everything on the remote device spec. 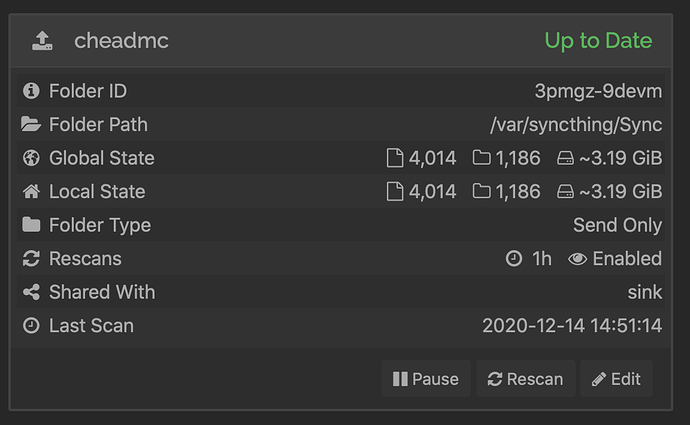 Here is the same folder on my data sink’s Syncthing deployment. 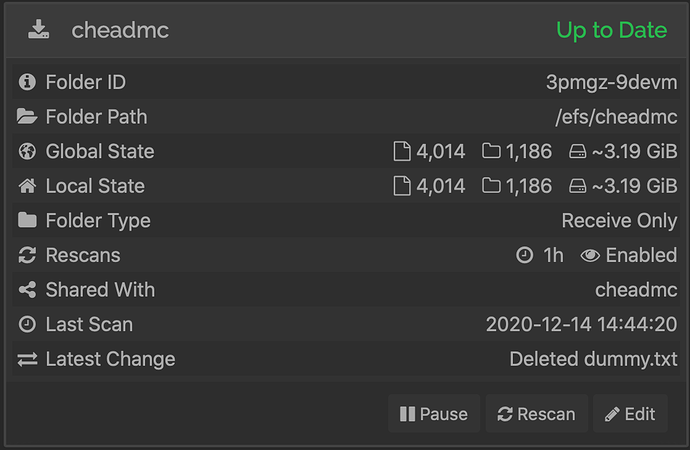 I tested syncing by adding and then removing a file dummy.txt on the source deployment, and it was added and removed on the sink deployment almost right away. What’s bothering me is that, as shown below, it has syncing stuck at 0% for the remote device, even after restarting both Syncthing containers. Should I be worried, or is this one of those things that just resolves itself?

If you pause (disconnect) and unpause the device that’s out-of-sync, does the problem go away? That might be a bug fixed in 1.12.1-rc.1.

Pausing and unpausing the device has no impact.

If your assumption in https://github.com/syncthing/syncthing/pull/7134 (“Even if they reconnect, index IDs still match -> no index retransfer.”) is correct this could be the cause here?

During testing of that bug I also once got in a similar state where reconnecting did not help (while still using a build without the fix).

Ah yeah right, I was thinking of something else, where reconnects could help.
Then I’d recommend upgrading to v1.12.1-rc.1 that contains the bugfixes. Alternatively you could run Syncthing with -reset-deltas on cheadmc and hope you don’t get caught by this bug again.

Sorry, but could I get some clarification on how to do that? I’m currently launching with Docker Compose using whatever default command is in the Syncthing image’s Dockerfile. If I set command to “-reset-deltas,” will that work? Also, there’s only one dash before “reset?” Otherwise, is there a shell command that I can issue in the container to accomplish the same thing?

I overrode the default command in my docker-compose.yml like so, and cheadmc remains at 0% synced after the container restart, even though the folder is all synced up. Is there anything else I can try?

That’s exactly the right way to do it. On which device did you change it? The -reset-deltas is needed on the “cheadmc” device, not the “sink” device.

Well, now I’ve restarted both containers with that flag in the command. It still says 0%, but at least it works.

Then it looks like the bug hits you consistently. You can try out the release candidate by using the rc tag, i.e. image: syncthing/syncthing:rc, which should hopefully finally resolve it. (And remove the -reset-deltas again, that’s not something you should run with constantly).