All out of sync 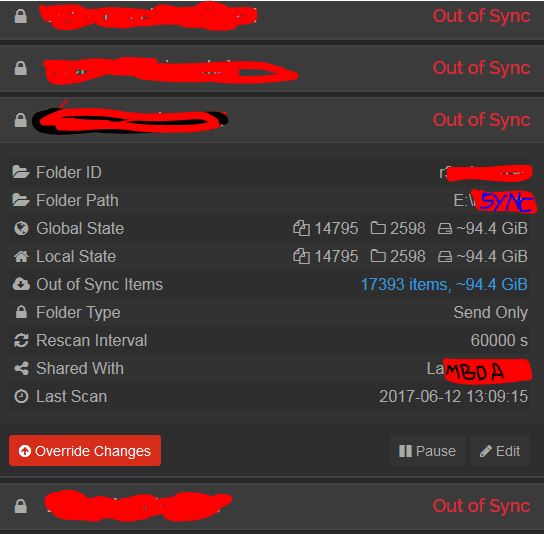 Hi all folders I have set up are ‘Out of sync’. Screen comes from [Windows 7] computer syncing to Linux Mint.

Mint is using program for Syncthing management instead of browser. Everything on the computer with [Mint] is showing as in Sync.

I had a Laptop [Mint] HDD failure. But before that crash I had certain folders synced between Mint and Win7.

So once I had Mint up and running, I have put files recovered from [old Mint] back on Data partition [photos documents]. Plus now I have had synced new E:\Sync folder from Win7 to Mint. I did it by creating manually new folder on Mint and syncing everything there from folder on Win7. Win7 explorer shows that there is in fact 14796 files - which basically same number as shown in Global/Local State [on screenshot]. But for some reason in “out of sync” line there is over 17k files

Another folder is having only one file that from what I see is also successfully synced but is still out of sync at the source [Win7].

I’m afraid to switch it to bidirectional syncing for now as I don’t know whats going on.

Can I ask you for advice please? 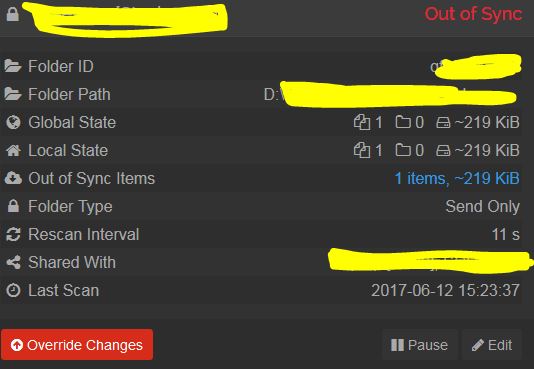 EDIT now I have added random file to the master folder from the last screenshot with one file and it shows in sync now ??? 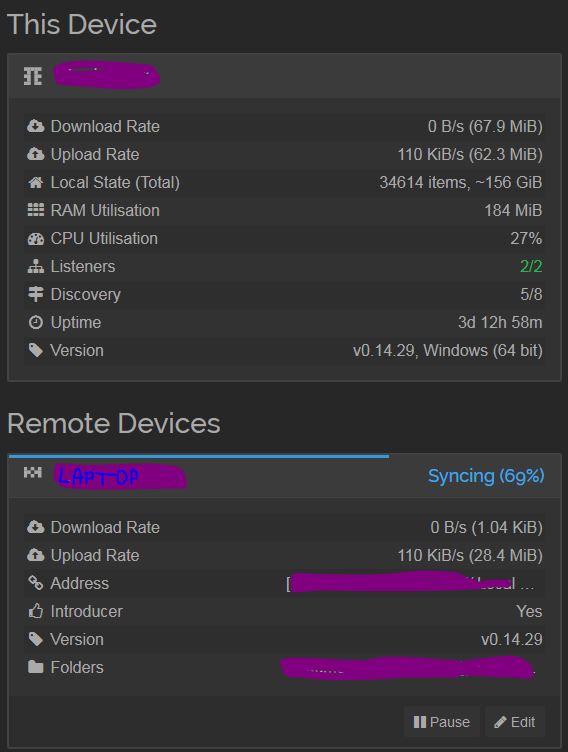 All syncing is finished now apart from abnormalities

Removed SyncthingGTK from Mint - will rely on browser. Will update once all scanning has finished.

The 17k vs 14k is probably due to having to announce files that were moved/deleted, which do not end up in the state perse, but the other side needs to be made aware of them. All of the files might be out of sync due to metadata changes (not necessarily data), but override changes should fix it. Did you check the logs on the Mint side, as I suspect it doesn’t have permissions or something along these lines. 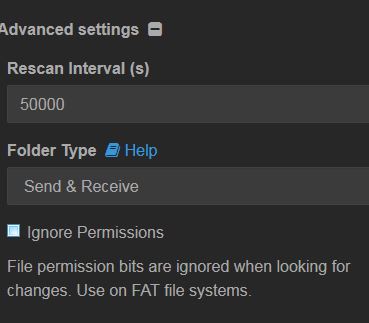 Although data on HDD on Win7 is in NTFS

announce files that were moved/deleted

I will only refer to this in case it can help with development.

So there was no moved or deleted files, they were all just copied across network… unless… they all have been moved

What to do when "override changes" doesn't work Support

Hi, I had a raspberry pi with a hard drive used for permanently online syncing. But the rpi died. After few weeks, I exchanged the hard drive for a new one (copy pasted all the content), bought a new rpi and configured it again to sync stuff. However, in the meantime I made some "big" changes on the data (on the non-rpi computer), like creating new updated files and moving folders and files from one location to another. As such the contents of the rpi-hard disk were kind of old. That said…

PS for records Ignore permissions were ticked only on Mint, unit that had status on everything ‘UP TO DATE’ - and was slave [Send & receive] at the time

had the same problem on mint were my sync area is on a partition shared between OSes and so is in NTFS format, checking ignore permissions on all folders solved the problem!